The bulldozers and jackhammers will soon move in as work begins on a host of ‘shovel ready’ projects. But there’s scope for groundbreaking digital innovation too.

The island city-nation of Singapore is considered to be one of the most innovative in the world and its urban design has inspired numerous other countries.

Particularly innovative has been Singapore’s efforts to accompany its 50 year urban development plan with a ‘digital twin’ of the city. Virtual Singapore, which was developed by the National Research Foundation, presents 3D semantic modelling to represent the real world – everything from roads and pavements, to public infrastructure.

But it is more than just layers of mapping and digitized blueprints. It also incorporates real-time information fed into it from networks of sensors around the world. Traffic, crowd, climate and demographic data can be revealed to produce new insights about how the city changes in the shape of a day or a decade.

Other governments are increasingly looking at digital twin technology, which has gained traction in industry such as manufacturing, aviation, pharmaceuticals and oil and gas. Companies create a digital representation of their physical assets so that they can better understand them and maintain and utilise them.

Digital twins also allow them to simulate the impact of making physical changes. In the case of an energy provider, it might be laying a new gas pipeline, or in Singapore’s case, building a new sports stadium. 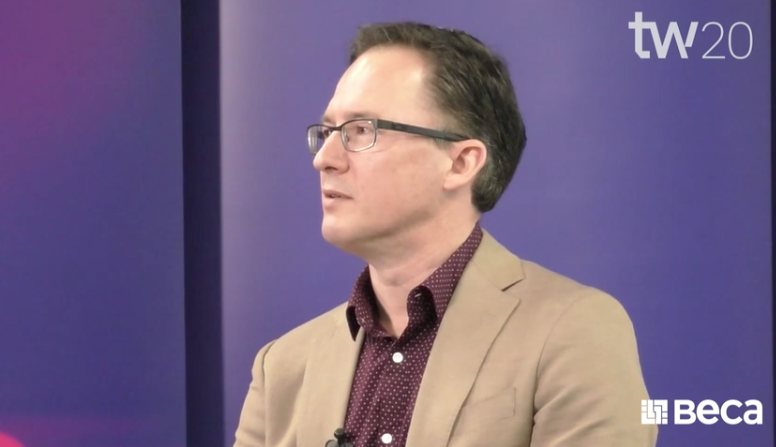 “By mirroring our physical environment digitally, we can easily discover potential challenges and shared solutions between infrastructure that too often is disconnected from each other,” said Infrastructure New Zealand chief executive Paul Blair.

“Our country has over $300 billion in infrastructure assets and will spend another $100-150 billion over the next 10 years in maintaining and improving our infrastructure. A digital twin would be an easy win to streamline and combine works, reduce uncertainty, and facilitate long-term strategic planning.”

That call was echoed this week during a Tech Week session on the digital transformation the shovel ready projects could stimulate.

“It is maturing rapidly, the convergence of that virtual representation of the built world, but then overlaying real-time information and the data analytics that come with it,” added Hyde.

He said the response to the Kaikoura earthquake of 2016, where numerous companies and agencies came together in a billion-dollar project to reconstruct a part of the state highway along the east coast of the South Island in less than a year, showed that New Zealand could move swiftly on infrastructure projects.

In the wake of the Christchurch quakes, when over 700 projects were kicked off as part of a $2 billion infrastructure spend to rebuild the devastated city, a coordinated effort to digitise and share information about the built environment had aided town planning.

They ended up having a very accurate digital representation of everything under the ground,” said Hyde.

However, the effort started to “atrophy” as projects were completed. There was no resource available to maintain a single digital point of reference to inform future urban development.

Hyde says that investing in technology to create a digital master plan for the country would pay dividends for everyone concerned.

It would allow central and local government as well as infrastructure developers to present a vision of future developments and gain feedback on urban plans, in a much more visual and engaging way.

Greater collaboration would be achieved as agencies and companies share information sets and work from the same accurate and up to date plans.

He argues that digital twin technology could also facilitate ‘construction automation’, such as modular design for homes to cut down building times. Once in place, digital twin models could be fed real-time information, just as in Singapore, allowing easier management of public assets and infrastructure.

So where are we at currently with digital twin technology? Hyde says there are “pockets” of activity. Infrastructure New Zealand points to Auckland Transport as being proactive in this space and Wellington has created a digital model of the city that can simulate sea level rise changes and traffic flows.

“It’s not a technology challenge, it’s the will to invest and bring people together,” said Hyde.

His hope was that we see the opportunity with our looming infrastructure splurge to treat digital infrastructure assets with the same importance as the new buildings, roads and railways we create.

Watch the Tech Week session Like Data Off A Shovel here.