Artificial intelligence is powering new ways of doing business in everything from banking to agriculture, with advances ranging from image recognition to machine translating offering real-world benefits.

But the first major survey to look at the adoption of AI among New Zealand organisations, reveals that just 1 in 5 are reaching AI maturity – the point at which they are achieving tangible impact from AI and when AI becomes central to their strategy.

That’s according to the State of AI New Zealand 2021 survey, which was completed in May and backed by Qrious, Spark, the AI Forum and the Ministry of Business, Innovation and Employment.

Of the 671 survey respondents from across the business community, just 7% considered their organisation to be engaged in “core practices” to support widespread AI adoption, while 17% were not considering AI at all.

Around 27% of Kiwi businesses are still just trialling AI, through ad hoc pilots or applying it to single business processes. To put that in perspective, similar studies from the US put the portion of businesses trialling AI at 52%.

So we are behind the ball when it comes to exploring the potential of AI. The businesses that are doing so are mainly small, “AI natives”, start-ups that have been using AI from day one. What do we need to do to drive AI maturity across our businesses, large and small?

Umbrellar Connect spoke to Sam Daish, Head of AI and Data Science at Qrious, who identified five ways we can shift the needle on AI adoption.

Too often, says Daish, businesses view AI as a new area of capability they have to spend considerable time and expense preparing to introduce into the organsation. 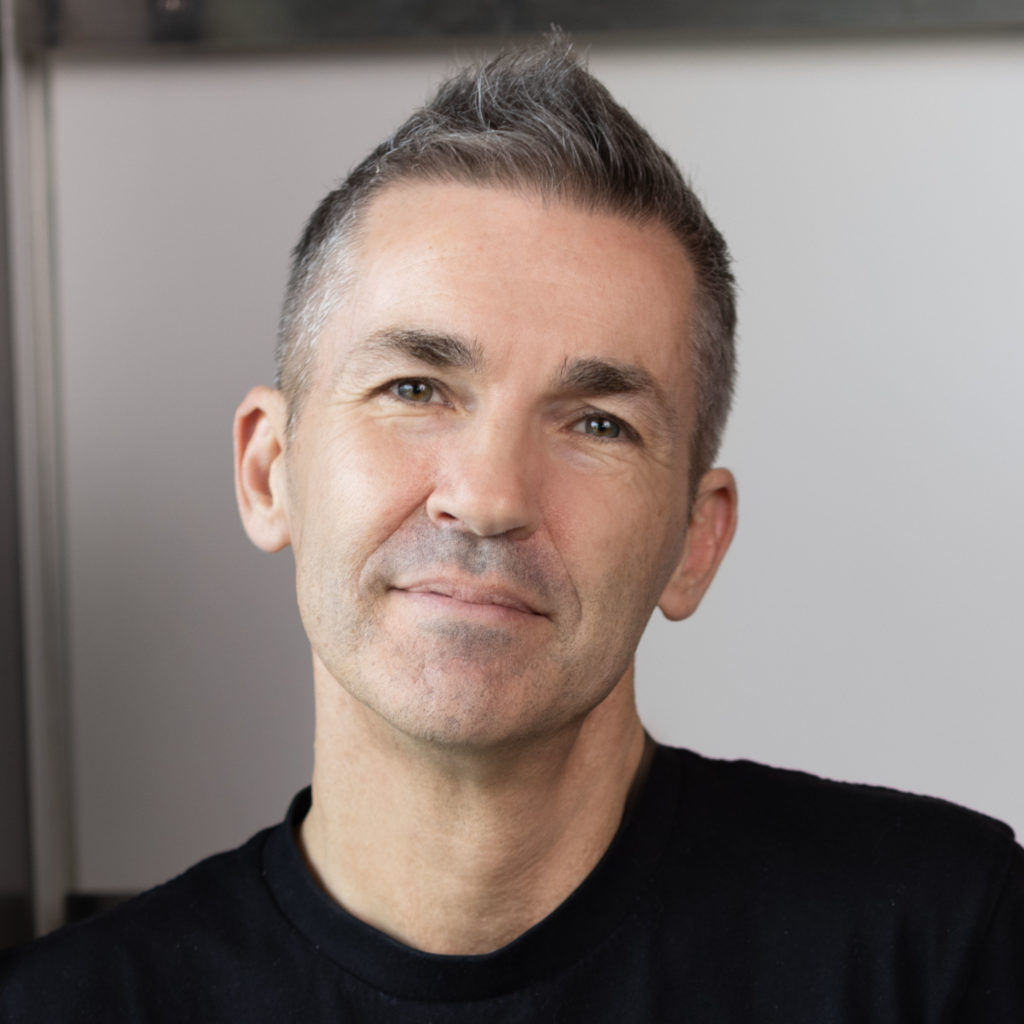 “When I talk with people that come from a business intelligence or data analytics, background, the first problem they raise is, hey, my data warehouse doesn’t work. I need a data lake,” says Daish.

A data lake is incredibly useful, and Qrious spends a lot of time helping customers design and develop them. But it takes time to build one and that may not be a priority at the moment. But it’s likely that your business has data in some format that can be used now and you can set about extracting it to use with AI and machine learning tools.

“What AI needs is access to almost the raw data,” says Daish.

“History is helpful, but you don’t always need history for what you’re trying to do.”

Daish points to a large online content provider Qrious was able to help by using AI to identify reasons why viewers were moving off the platform.

“They had heaps of problems with their base data and their reporting,” he says.

“Through direct access to the portal where customers watch content, we were able to get the information to create a churn prediction. That was completely in parallel to all the other stuff they were doing.”

The point is that you don’t need to have all the building blocks in place to start making use of AI for important business processes or decision making. The tools, many of them cloud-based are more readily available than ever and can receive data from legacy systems to offer new insights or automate processes.

“You don’t need to do it in this type of lockstep way,” says Daish.

“That could take years. Just go a bit faster, be a bit more creative and ambitious.” 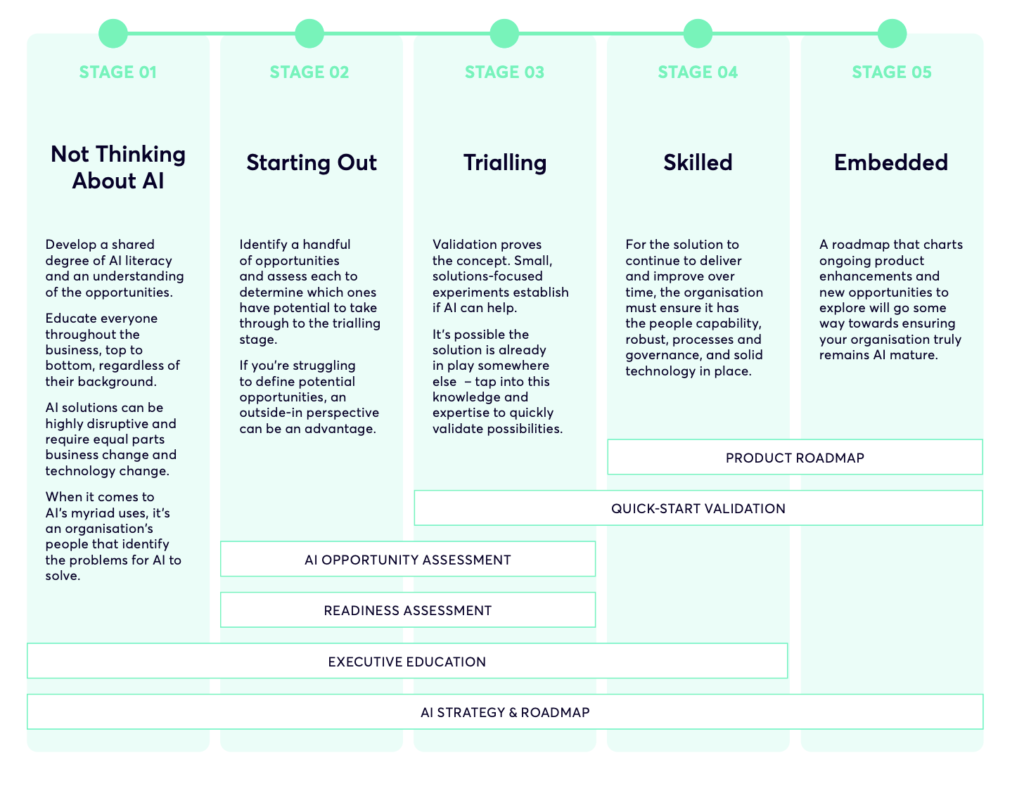 When you do actually embark on an AI project, the expectations have to be clear from the outset. Daish says large organisations, in particular, sign off on investment in AI with high expectations but don’t support its introduction sufficiently, leading to the project failing.

“They don’t get good results out of it and say, this AI stuff is kind of bullshit,” says Daish.

“We’ll get an insights insight analyst to go and do some natural language processing over our call centre information.”

An ad hoc approach to AI and underinvestment kills a lot of promising projects early on, Daish adds. He says US and European companies are more willing than ours to take a longer-term view

“They’re concerned about their quarterly results and their annual results, but they tend to look at something, this will have three-year payoff or a five-year payoff,” says Daish.

The willingness to accept a return on the investment over a longer period than the next financial year was a barrier to AI adoption here.

“It makes it hard to invest in something like machine learning or AI, where your data is unique in your business context unique,” Daish says.

“In some sense, you have to treat it like an R&D project.”

The digital economy minister, David Clark, said the report was “a demonstration of the impact of the Crown’s investments through venture capital and grants in ‘AI native’ firms.”

That’s because smaller businesses were further along the AI maturity scale. But Daish says the Government needs to invest more in early-stage start-ups that could take innovative uses of AI to the world.

“The Government has changed the funding structure that Callaghan Innovation uses to fund these companies, in some cases making it less easy for those organisations to get money,” says Daish.

He’s talking about the Crown innovation agency transition from offering one-off R&D grants to using the R&D Tax Incentive, which offers a 15% tax rebate on a company’s R&D efforts. The problem is that companies need to have the money to spend on R&D in the first place and there has been confusion around what aspects of AI development actually count as eligible R&D.

“This survey reflects things before those changes, but it seems to me to be a very backward step,” says Daish.

Better access to funding would help, but Daish says the Government could help in other ways, such as being more willing to consider local companies when it comes to procurement decisions around AI tools and platforms.

That would make us less reliant on “hyperscalers” such as AWS, Google Cloud and Microsoft Azure, which offer cloud-based AI tools, and develop the local capability to give the AI skills base more critical mass. 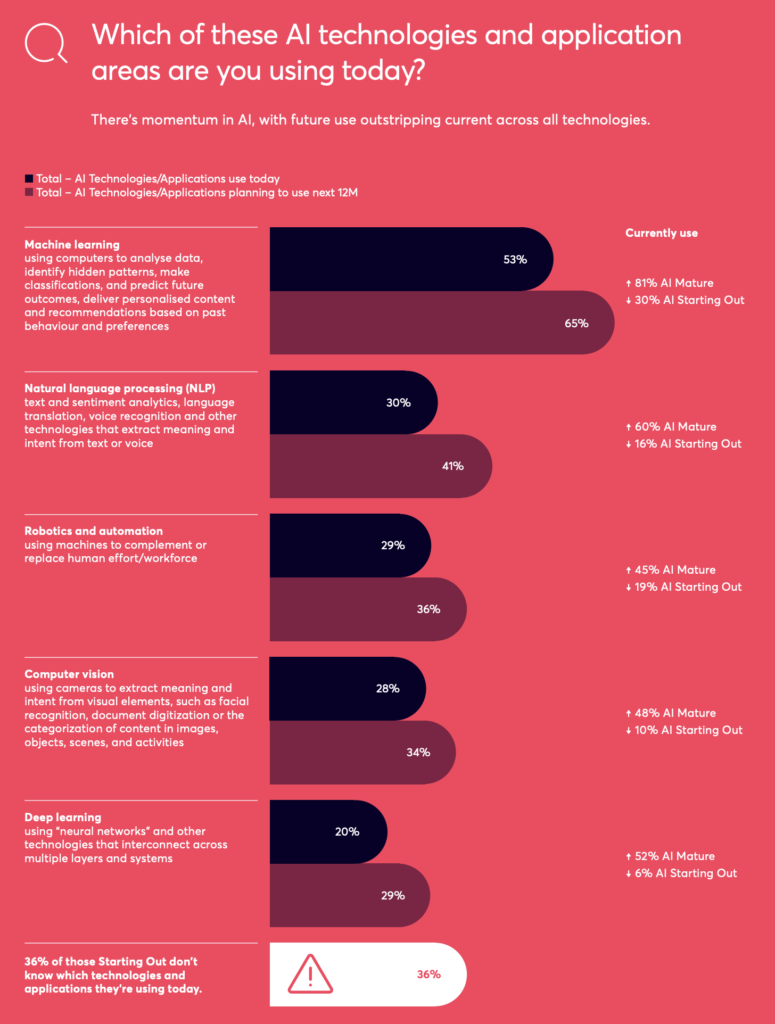 If there’s one key takeaway from the State of AI report it’s that technology isn’t the problem – there are plenty of great tools available, much of them available effectively for free as open-source programs, without associated licensing costs.

The real problem is finding the capability within people to make good use of the technology. Our skills and experience in using AI are patchy.

“You need the expertise to use that stuff properly,” says Daish.

“I think it’s really easy to get started the wrong way by hiring a single person. We hired this data scientist and all they do is give me marketing insights reports!”

Having the wrong people driving AI projects was a common problem, though Daish acknowledges that the talent shortage is a real problem. Larger businesses are more likely to have the resources to justify building AI-capable teams internally. But demand for data and machine learning engineers was outstripping supply.

“Before Qrious, I was working at Xero,” says Daish.

“The people we were talking to were also talking to Google and Palantir. We are in an international market for these people. You need a very good story about how you’re going to help them develop their career.”

One solution says Daish is to work with the growing number of independent local consultancies such as Qrious, to not only access skilled people, but build external partnerships to build the organisational mindset, executive education and AI literacy.

Issues relating to ethics, bias, transparency and accountability were flagged as serious concerns by respondents to the State of AI survey, with 47% disagreeing that businesses are transparent enough about their AI use; 42% concerned some will go too far, and 47% believing that they don’t have a handle on the legal and ethical implications.

Daish says ethics and transparency are fundamentally important to the responsible development and use of AI, but that organisations can get lost down the AI ethics rabbit hole and end up putting off doing anything with AI.

“There’s a little bit of talk of the ‘black box’ and things like that,” says Daish.

“That’s not really very helpful. The reality of it is that these tools give you immense control. You control the inputs, you decide what data you put into it, and you can test and quantify the results that come out of it.”

“This is not a mystery. It’s not magic. It’s not alchemy. It’s technology that you control every step of.”

Many businesses are able to begin using AI for applications that don’t raise sticky ethical questions, while others will need to tread more carefully to build trust and ensure compliance with legislation and ethical frameworks.

Read the State of AI in New Zealand 2021 report here.