Review: Vodafone TV is the one gadget my household can’t do without

Of the many tech toys crammed into our home, the one we will never give up is a small black box hidden out of sight.

A robot cleaner my kids like to call ‘Wipey’ keeps our kitchen floor clean.

A hallway smoke alarm talks to us, tells us when to change the battery and knows the difference between burnt toast smoke and mist from the shower.

A smartwatch measures my son’s heart rate, counts his steps, and tracks his sleep patterns.

Our house, like many modern homes, is crammed full of gadgets and tech toys – some are useful, and some are just for fun.

My son’s favourite is Anki Overdrive, a car racing game he plays with his friends using iPhones and iPads.

My daughter loves Cozmo, a Wall-E-like creature that can learn everyone’s name, respond to voice commands, and take himself for walks.

The cat likes to chase a tiny orange Sphero ball for exercise, controlled by us via an app.

That’s not counting all of the Playstation, Xbox and Switch consoles, the laptops, iPads, smartphones, smartwatches and bluetooth speakers.

Is it too much? Possibly.

Then we learned what happens when the country goes into level four lockdown, and usage all of those tech toys increased ten-fold.

But the gadget that gets used in our house isn’t the glitziest tech toy. It can’t talk and it can’t do tricks.

It doesn’t hog the limelight.

Instead, it’s a small black box that sits behind the TV, mostly out of sight.

I’m talking about Vodafone TV, a streaming device I didn’t know I needed until it arrived. 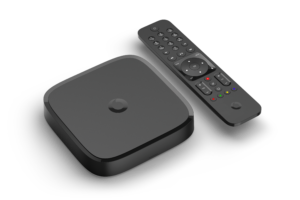 Released less than a year ago, Vodafone TV arrived without a huge amount of fanfare. It seemed to good to be true: a product from a local cellular and internet provider that wasn’t designed to hook users into its own services.

Instead, Vodafone TV combined everyone else’s services in one handy package.

It’s got Freeview TV, allowing you to stream all local channels, if live television is still something you want to watch.

It’s got access to all of Sky TV’s channels, if you’re already a subscriber.

It’s got apps for all of the free-to-air channels, TVNZ OnDemand and ThreeNow.

And it’s got apps for all of the paid services, like Netflix, Amazon Prime Video and Neon.

Before I’d started using Vodafone TV, I’d become infuriated with my Smart TV. All those apps keep crashing, breaking and stalling because updates were no longer being released for them.

Using our expensive Playstation or Xbox consoles to stream television shows seemed silly, especially when they didn’t have all of the apps I needed.

But Vodafone TV has changed all that. We use it every day, to watch everything. It’s our go-to. To catch the latest HBO series like I May Destroy You on Neon. To stream documentaries like The Social Dilemma on Netflix.  To check out the new season of The Boys on Amazon Prime Video.

We use it to catch up on Grand Designs on ThreeNow, the political debates on TVNZ 1, and if we’re running late, to watch the news on catchup services. Because Vodafone TV lets you rewind and watch stuff you turned up late for.

And when the kids are allowed to, they use it for Netflix movies and shows like Carmen Sandiego and Storybots.

So, you can take the robot floor cleaner, the talking smoke alarms, my son’s electronic cars and the cat’s exercise toy.

But you can’t take my Vodafone TV. That’s one gadget that’s staying put.