The Zero Carbon Act, what it could mean for you

As implementation of the Zero Carbon Act begins, businesses are under increasing pressure to actively contribute to a zero-emissions economy.

New Zealand’s well-established reputation as a pioneer in environmental reform was reinforced by passing of the Zero Carbon Act in 2019. Under this Act, New Zealand has committed to reduction by 2050 of net greenhouse gas emissions to zero, and methane emissions by up to 47%.  It’s a policy change that will have implications for New Zealand businesses because, for New Zealand to be able to fulfil its obligations under the Act, businesses will need to actively commit to cut their carbon usage.

The Ministry for the Environment says the Zero Carbon Act provides New Zealand with a framework to develop and implement sustainable climate change policies toward two objectives:

The Act also involves reporting obligations that have now been imposed on local authorities, as well as public service and government-controlled organisations.

The Zero Carbon Act is a move beyond New Zealand’s past approach of offsetting emissions by planting millions of trees – this is recognised as important but insufficient in light of the urgency and magnitude of the action needed.

So what does this mean for business?  Climate change inaction carries significant risks if not responded to now, not least of which will be that non-compliant businesses may struggle to find investors or loyal customers.

Last year, the Zero Carbon Act was passed with support from all parties in Parliament (with the exception of ACT). The Act sets a target global warming limit of 1.5C, considered to be an upper threshold before the worst climate change effects start to show.

With the General Election fast approaching, climate change and the economy are two pressing and related challenges that are top of mind for the two major parties and for many voters. 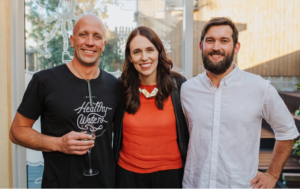 Jacinda Ardern with the co-founders of Sustainable Coastlines / Microsoft.com

Labour, the lead party in the incumbent government, is promising a move to 100 per cent renewable energy, with projects like pumped hydro at Lake Onslow, and a new waste management programme. Labour leader Jacinda Ardern mentioned in the first leaders’ debate that climate change is one of the biggest challenges New Zealand will face “and we have to prepare our country for that.”

The National Party appears less committed on the climate change front, with leader Judith Collins stating that that “the likely impacts of climate change are being hugely overstated by the media and political left”, and that the emissions target has “almost zero chance of being achieved, both here or abroad, and isn’t justified by any scientific or economic findings”. Despite this criticism, National supported passage of the Act. 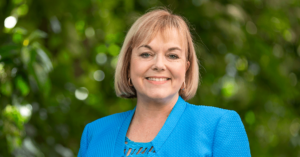 The agricultural industry is the political ‘hot potato’ in terms of implementation of the Act. National says the current Labour-led government has limited understanding of farmers’ perspectives, and that imposing carbon and methane emission controls on dairy farming in particular will be highly detrimental to the New Zealand economy. Conversely, Labour claims they are very aware of the needs of farmers, and that farmers are actively engaged and aware about the need for change.

Business has a key role to play 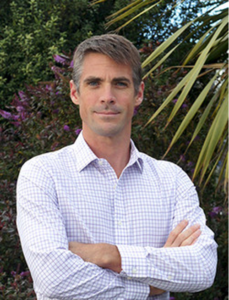 There is no doubt that governments, policy makers and public sector organisations can’t do it alone – the private sector also needs to get engaged and join the push for low carbon emissions. According to John Mezger of NZ Law, no matter which party takes power following this month’s Election, climate change commitments will involve serious calls to action for business as they are “forced to seriously consider every aspect of their existence”.

While things are changing fast, momentum has been affected by the pandemic. Prior to advent of COVID-19, KPMG research found that over half of New Zealand CEOs believed their growth would be determined by how their organisations transition to a low-carbon and clean technology economy. Months later, amid the pandemic, the proportion who reported environmental and climate risk as the greatest threat to growth had halved.

The Zero Carbon Act includes highly specific obligations for government to comply with carbon targets when setting policy.  According to John Mezger of NZ Law, the carbon targets will also be a central component of all future business thinking about strategy, systems, infrastructure and investments. He recommends that “businesses (and all of us, really) consider how we can reduce our emissions because, at some point, we will all be encouraged to look at how we consume resources and to make significant changes.”

The key point, according to Mezger, is that organisations need to be proactive and respond to the Act’s pressures now, before the government is forced into legislating stronger directives.

Mezger urges business to identify specific ‘carbon hotspots’, including how materials are purchased across supply chains, their distribution models, their business premises with features such as air conditioning and electricity usage, as well as protocols on staff travel and commute options. This will involve looking critically at how they run their business, particularly how they measure their carbon footprint and identify how their business can improve and innovate. Electric vehicle sharing, charging networks, and renewable energy options are some of the ways businesses can pre-emptively set themselves up to respond to pressures.

There are many examples of how the private and public sector, and community groups have already effectively joined forces in innovation. For example, Sustainable Coastlines is a project supported by successive governments to reduce waste in our environment, while many leading organisations including the Warehouse Group are announcing the actions they are taking on a path to being carbon neutral (see a list here).

Technology fixes are emerging, with new possibilities for sustainable, smarter processes and infrastructure – for example, building smarter cities that generate their own solar power supplies, breeding cows that produce less methane, and efficient public transport systems. The opportunities that can be actioned through collaboration with government and investor support are considerable. The World Bank estimates that new resilience infrastructure, for example, generates $4 benefit for every $1 invested.

Alleviating climate risk is set to become its own innovation area, impacting products, services and supply chains as customers become more sensitive to the impact of climate change on their lives. As the WE Forum reports, as product and market opportunities are created and expand, new industries and resources will be created, through opportunities in the fields of renewable energy, agriculture, mining, forest regeneration, and even sustainability-linked financing.

Yet Mezger cautions business about the danger of ‘quick fixes’. He warns that “a decision that eases the economic burden now may just be a patch on another problem that needs to be readdressed in the near future”. As he points out, trade-offs may be inevitable: “Unfortunately, businesses and decision-makers may be forced to choose between options that are not environmentally desirable, but less expensive, and those that are more costly but benefit our goals under Zero Carbon Act and that ultimately address climate change.”

Whatever the solutions may be, there is growing pressure from consumers, investors, activists and government for business to be proactively engaged in minimising carbon emissions. While the result of the Election later this month will determine the detail of government action on climate change, all stakeholders are expecting business to step up and actively take a leadership role in addressing sustainability issues.