Microsoft’s holographic video system Azure Mesh provided the sizzle at Microsoft’s virtual developer conference, but the underlying message was all about the accelerating power of working in the cloud.

Satya Nadella, Microsoft’s Chief Executive and a nearly 30 year veteran of the company, can always be relied on for giving us the big picture view and this year more than ever the message was infused with the experience of the Covid pandemic and the weight of the problems facing the world.

“We will need to foundationally transform how the cloud can drive the next level of broad economic growth that everyone can participate in,” he told the Ignite 2021 conference.

Check out the Microsoft book of News for all the news from Ignite 2021.

He identified a handful of themes that will define the world of technology in the next few years. There will be an increased focus on decentralised computing power, putting processing grunt, data storage and analytics closer to where it is needed – what’s known as edge computing.

We will see the form and function of our devices reimagined “across the stack, from silicon to the operating system to the experiences themselves,” said Nadella, clearly with a nod to the newly debuted Azure Mesh (see below).

Data governance and provenance would therefore become more important than ever as these new tools applied data to solving big challenges in personalised medicine, through to carbon recapture (Nadella has clearly been reading Bill Gates’ new book (How to Avoid a Climate Disaster).

Finally, was the repeated call for responsibility and accountability to go along with the use of powerful artificial intelligence tools. 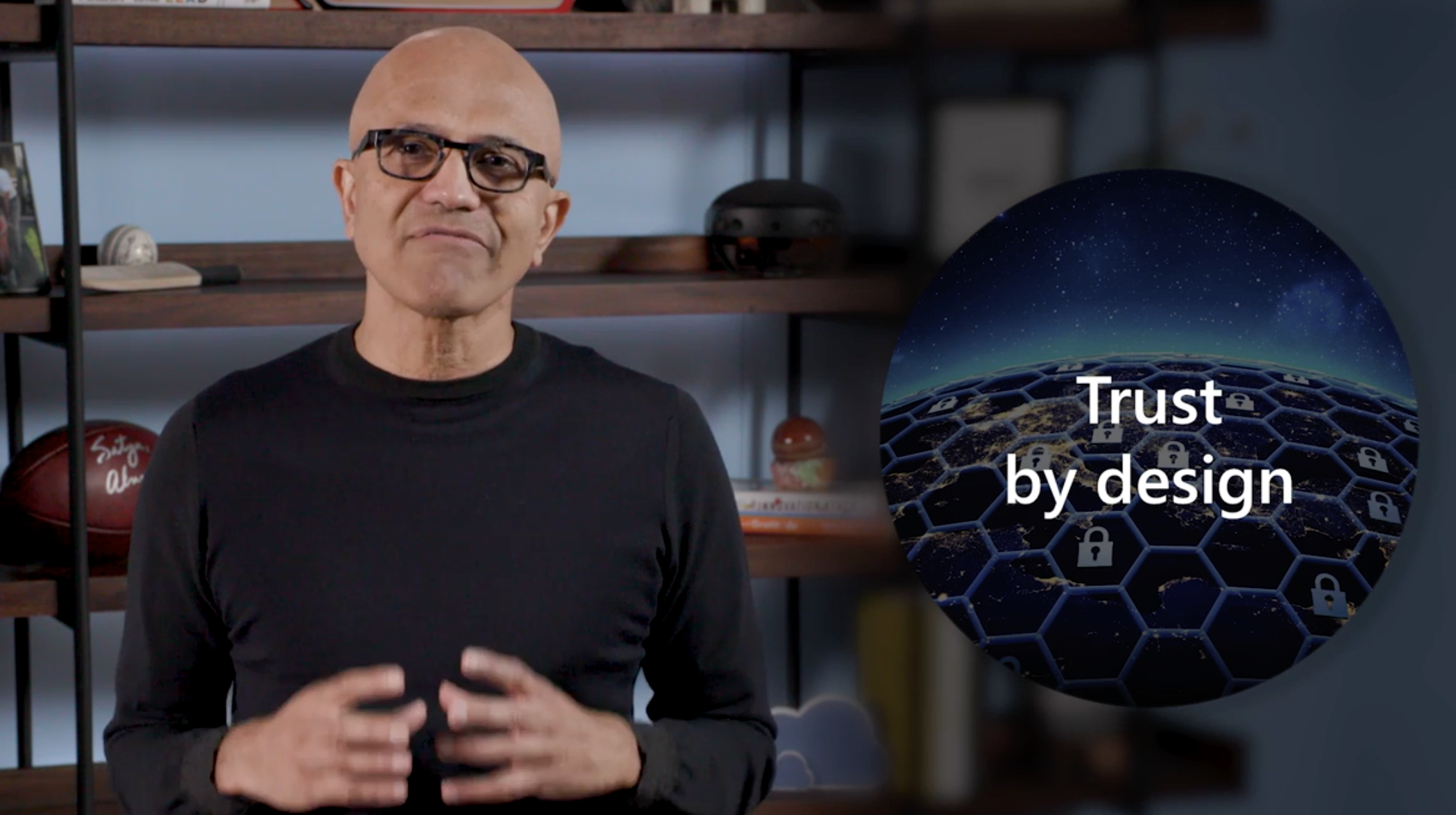 “We need to have ethical principles govern the design, development and deployment of AI. Our technology needs to be secure by design and promote zero-trust architectural principles,” said Nadella.

So far, so visionary. But Ignite is a geekfest for Microsoft developers worldwide. So what are the key developments that should be on their radar?

We are all heartily sick of Teams and Zoom meetings and Microsoft has spotted an opportunity as a result, building on its experience with mixed reality and the HoloLens augmented reality headset to develop mesh, a holographic video conferencing system.

Azure Mesh allows people in different locations to leverage any device and operating system to participate in a shared holographic environment, a 3D rendering of an environment. One of the keynotes delivered at Ignite was delivered this way using the AltspaceVR virtual reality which is owned by Microsoft.

Mesh is powered by the Azure cloud and suited to the HoloLens 2 headset, but the key thing is that Microsoft wants development across the VR and MR (mixed reality) hardware and application ecosystem. It wants Mesh to be the thing that finally takes mixed reality mainstream. What we are talking about here is a more compelling way to hold meeting and conferences. Initially people will be rendered in Mesh as avatars, but will eventually appear as themselves, if they so want to.

Already, HoloLens is employed by virtual teams to meet and explore the same information or 3D models. This is a way of extending that across all sorts of devices and applications. The use of the OpenXR standard should speed development across the industry. The key will be the user experience, but with Mesh able to tap into the key components of Microsoft’s software stack, including Microsoft 365 and Dynamics, it is off to a good start.

As Nadella pointed out, with the rise of automation, industry 4.0 applications and better connectivity via the likes of 5G networks, more computing is going to be done at the “edge” – in factories, smart city networks, football stadiums and airports.

The march to Azure remains integral to Microsoft’s fortunes, but the company has increasingly being investing in edge technologies. With Azure Percept, which is now in public preview mode, developers have a set of tools geared towards using Microsoft technology and cloud services, device management and AI tools, in edge computing scenarios.

An early development kit includes Azure Percept Vision, an intelligent camera system and Azure Precept Audio is available for those to analyse sounds or natural language with AI tools. New Zealand edge computing use cases are still limited, but plenty of organisations have demanding real-time computing needs where constantly going to the cloud could be replaced by more efficient local processing, data access and analysis.

Microsoft 365 and Teams get the usual cluster of updates and additions as Microsoft capitalises on the global move to remote working triggered by the pandemic. With the Teams conferencing platform, Microsoft is increasing the scale of events it can accommodate. Teams can already host up to 1,000 attendees, but soon the broadcast (viewing) mode will be able to scale up to 20,000 viewers, opening it up to large scale public events and conferences for the first time.

Teams Connect is a new feature that will let users share channels within an organisation among internal or external collaborators for full usability across chat, meetings, sharing of files and editing.

Powerpoint Live is now available in Teams, which lets hosts give real-time presentations. New presenter and dynamic view modes are also being launched. Ignite also saw more demos of Microsoft Viva, which debuted last month and is an employee experience platform, sort of like an intranet, learning platform and productivity planner combined – and compatible with Microsoft 365.

Part of it includes Viva Insights, which allows organisations to keep tabs on productivity across teams of workers. But it mainly builds on the existing MyAnalytics app available to outlook users that helps people manage their email workload and manage their time more efficiently. Insights builds on that by analysing the contents of emails and calendar entries to provide suggestions. There are apparently wellbeing tools rolling out too which will help employees deal with new hybrid working schedules.

Ignite saw Microsoft talk up its Power Platform, which makes it easy to analyse and visualise data and easily develop apps and workflows without the need for coding.

Continuing with that theme of simplifying app development, Microsoft has introduced Power Fx, a low-code programming language that can create components for Power platform products such as Power BI and Power Automate.

The language apparently originates from the canvas-app functionality that already existed in Power Apps and is based on Excel-like formulas used for working with data. It should allow more flexibility in creating simple apps, particularly with the objective of extending functionality to iOS and Android devices.

As organisations move to multi-cloud and hybrid on-premises/cloud environments, keeping tabs on data spread across multiple platforms is a big priority. Nadella touched on the need for improved data governance as the migration to the cloud accelerates and Microsoft has a product to help – Azure Purview.

It has been available since December and since then Microsoft says it has been used to find and classify over 14.5 billion data assets. It can now be used to scan Azure Synapse workloads across serverless dedicated SQL pools. Purview “provides an end-to-end view of your data estate that previously was impossible,” said Nadella, with the likes of Oracle, AWS, SAP, Teradata and on-premises SQL Server covered.

Azure Purview should gain traction as leadership teams grapple with the task of locating and managing their data across more complex computing, storage and application environments.

Check out the Microsoft book of News for all the news from Ignite 2021.