Meet Zwift, the app that will get you back on your bike in no time at all

At-home fitness apps have seen a surge in popularity since Covid-19 lockdowns began around the world. How does Zwift work? Chris Schulz takes it for a spin.

So what is it?

Like many at-home fitness apps, Zwift has seen a surge in popularity since lockdowns began back in March. Users of Zwift have more than doubled since this time last year, and it’s easy to see why. Zwift helps you make use of that expensive mountain bike that sits idol in your shed by turning it into a fun at-home exercise machine. But that’s not all: the app turns cycling into a video game, giving you an avatar and letting your race your way around courses from across the world. After a year in which most people haven’t seen much more than the four walls of their home, or are restricted to a 5km radius around their suburb, it’s no wonder Zwift has taken off. That popularity includes New Zealand, with more than 17,000 users signing up since its launch here. 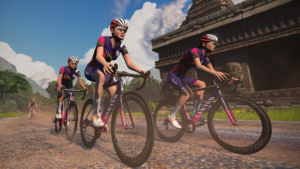 Zwift helps cycling fans make use of their mountain bikes from the comfort of home. Photo/Zwift

How does it work?

Setting up a Zwift system takes a bit of time – and some investment. First, you need a bike. If you’ve got one already, it’s pretty simple. Just take the back wheel off and connect the frame up to some new-fandangled bike tech like the Tacx Neo2. Then you just need to download the Zwift app, connect it all up, and you’re away. Once you’re on your bike, you can choose from a variety of workouts and courses from around the world. Best of all, the app is full of real-life people that you can compete against. You can give a thumbs up to Jack from the UK as he passes you on a particularly steep stretch of hill, then give him another one when you pass him back on the home straight.

Zwift is very addictive – and that’s great for your fitness. The first time I used it, I only lasted 25 minutes. But if you’re persistent, you can get fit really fast. The next time I was up to 40 minutes. The third time was well over an hour – and that one included some very steep hill climbs. Now I look forward to my daily Zwift sessions. That’s because all of your stats are saved after every ride, so you can watch your fitness improve in real time. There’s also something about racing against real life people that brings out a competitive streak in me. I’ve sworn under my breath as people from Germany and Australia pass me, but it instantly makes me speed up in an attempt to catch them. I don’t get that from solo road rides around home. Best of all though is Zwift’s use of scenery – it can be quite stunning. At one point, I found myself biking across bridges around Paris. At another, I found myself gasping at fish as I pedaled through an aquarium. It never looks less than awesome. 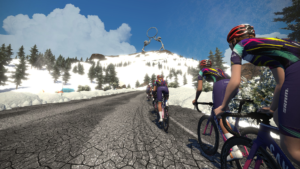 A scene from Zwift, an app that lets you bike on courses from around the world. Photo/Zwift

Are there any downsides?

If you don’t have much space at home, finding room for a Zwift setup can be difficult. You really need a garage or spare room to set it up properly. Depending on your choice of bike tech, it can be a bit noisy too – especially if it’s set up in the lounge. And the set up is a bit more complicated than just laying down a yoga mat, or picking up a few dumbbells. They’re minor quibbles though, because I’ve loved every second I’ve spent ‘Zwifting’. Yes, Zwift is becoming so popular it even has its own terminology now. 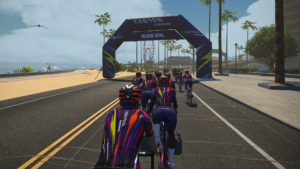 Zwift lets you race against cyclists from around the world. Photo/Zwift

So how much does it cost?

The app itself is moderately priced at US$14.99 (NZ$22.67) a month. That’s about the price of a gym membership – if you live in a country that allows gyms to open. So if you have a bike and are stuck working from home still, it’s a no-brainer. But it’s those other costs, for a new bike and all the tech to set it up, that might be prohibitive to some. It’s a pricey investment for sure, but one which is instantly rewarding. I’m going to be attempting the Tour de France – virtually – in no time at all.