Data dumps and security breaches: Watch Dogs: Legion is a hack-load of fun

Fancy leading a cyber-rebellion through the streets of London? Then Watch Dogs: Legion is the game for you.

It’s a bright London day, but you can barely see the sunlight.

So many drones whiz overhead that they blur out the sky, humming incessantly as they fly across invisible motorways on their way to delivering packages, securing crime scenes and monitoring the city’s shell-shocked residents.

In Westminster, one lands nearby. Your task is to hack it, jump on, fly it to a nearby building, distract several security guards by hacking into their phones, attach a giant computer server to your drone then deliver it to a nearby cargo ship.

That sequence comes a few hours into Watch Dogs: Legion, the third iteration of Ubisoft’s tech-heavy series, and it’s one of the most memorable gaming experiences I’ve had in a long time. 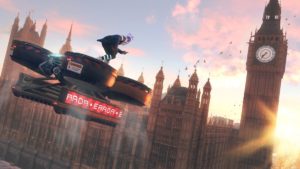 Flying drones is just one of the fun things you can do in Watch Dogs: Legion. Photo/Ubisoft

There are plenty of those moments in Legion, which wisely switches focus from the American cities of Chicago and San Francisco profiled in the first two games, to the oppressive streets of London.

Like an episode of Black Mirror, Legion is set sometime in the near-future. Bombs have gone off around the city. Armed militia patrol the streets. Drones whir overhead. Cybersecurity breaches run amok. Many wear masks. Paranoia is rife. Chaos reigns.

Sound familiar? As a game several years in the making, Legion’s release date – coinciding with the frenzied American elections, a worldwide pandemic and constant barrages of conspiracy theories spreading across social media – couldn’t have been timed any better.

Timing’s one thing, gameplay’s another, and Legion also delivers on that front.

As part of the hacker group DedSec, you’re tasked with clearing the group’s name from those bombings, as well as freeing London from the constant military surveillance that impacts their day-to-day lives.

To do that,  you are John Thomson, a mohawked hacker with neck tattoos and a nose ring. Or you’re Cassandra McGuire, a bank teller who’s just found out she’s been made redundant. Or you’re Diane Morris, an activist ready to hit the streets.

In Legion, you can play as literally anyone, and as an open world gaming experience, it’s a hell of an achievement. If you see someone walk by you who you like the look of, you can recruit them to DedSec, then play the game as them. 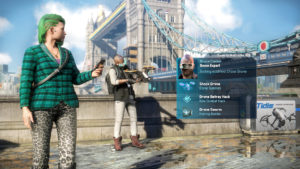 In Watch Dogs: Legion, you can play as anyone you take a fancy to. Photo/Ubisoft

The mind boggles at how much work that must have been for Ubisoft’s character designers, and the impact it would have had on cut scenes and character animation. There’s a great Washington Post read on how it was put together if you’d like to know more.

When it comes to open world titles, Grand Theft Auto V is often held up as the pinnacle of achievement, but even that 2013 title only had three playable characters. In Legion, there are hundreds, making its replay value skyrocket.

It’s a stunning achievement and a major selling point for the game, for sure. It’s hacking options, including cars, drones, cameras and security systems, are also more seamless than in previous Watch Dogs releases.

But other factors let it down, meaning Legion can’t and won’t challenge GTA V for that open world title.

During that drone-hacking mission I mentioned earlier, I failed twice because of two minor screw-ups that, had this game been play-tested enough, shouldn’t have happened. Others have have had issues with corrupted save games and their Xbox crashing.

I didn’t have those problems, but I did have issues with Legions’ story, which never really progresses from IT busywork: infiltrating security zones, stealing laptops, wiping hard drives, copying ID cards, manipulating infrastructure. Often, taking out opponents is easier with a gun than with hacking, making all those cyber options pointless. 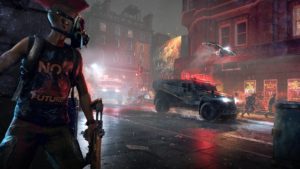 Watch Dogs: Legion is set in the near-future in London. Photo/Ubisoft

Legion treats data like a commodity, which, when done right, can make for fascinating entertainment. We have four seasons of Mr Robot to prove that. But Legion’s story never quite managed to capture my attention as much as the game’s characters and setting did.

Hacktivists clearing their name has been done to death. But, standing in the streets of London, armed with a phone and a nose ring, hacking my way into control of two double-decker buses, then making them crash them into one another as drone capture everything on camera?

Well that’s a hack-load of fun.

If you liked this, you may also like to read …