There's a certain thrill when Apple releases an iOS update ‒ it’s almost like getting a new phone.

This year’s release, iOS 14, announced at the firm’s virtual World Wide Developers Conference, has some exciting new features including a few that will be familiar to Android users.

The Home Screen has finally been redesigned with the incorporation of newer widgets – the most significant update Apple’s ever made, said Craig Federighi, the company’s senior vice president of software engineering. 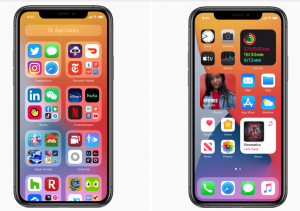 He said they applied what they learned from designing widgets for the Apple Watch’s small screen, to redesign the iOS 14 widgets. The new widgets can be pinned alongside your apps, are resizable like the Windows Phone Live Tiles, and surface timely information at a glance. You can also create a ‘Smart Stack’ of widgets, which will bring up widgets based on time, location, and activity, and won’t take up as much screen real estate.

Another organisational feature is the new App Library which will come in handy if you have numerous apps across multiple pages. It automatically orders the apps into logical, searchable groups much like Android’s app drawer, so you don’t have to swipe through several pages to find what you’re looking for.

Samsung Galaxy users might recognise ‘Picture in Picture’, which allows you to keep watching video while using other apps. iPhone users will now be able to watch a video, or take a FaceTime call without the screen being taken over.

One long-awaited feature for Apple customers is having the ability to set third-party apps as the default email or browser, for example, links open in Safari automatically but if you prefer Chrome, you could set that as your default browser.

The Messages app is changing too. You’ll be able to pin conversations to the top of your  messages list and keep up with group threads through mentions and inline replies.

Last year’s update, iOS 13, saw an emphasis on privacy and Apple has built upon this in iOS 14, requiring apps to obtain user permission before tracking. The App Store will also feature summaries of developers’ self-reported privacy practices. People will also be able to choose to share their approximate location with app developers rather than their precise location when granting an app location access, and find more details about how an app may be using their microphone and camera.

A handy new tool a lot of people will like is the App Clip which allows people to run part of an app without downloading it – Google first did something similar in 2016 with its Instant App feature.

When you scan a QR code, an NFC tag or a dedicated App Clip code, the App Clip launches. For example, if you want to hire an e-scooter but don’t want to download the corresponding app, you would hold the iPhone up to the QR code on the scooter and App Clip will launch, allowing you to hire it straight away.

Many of us now have Paywave features on our phones, and it looks like our car keys are next.

Apple has developed a digital car key feature in iOS 14 – you’ll be able to unlock and start your car with your iPhone or Apple Watch using NFC technology. Currently, it’s only compatible with the new 2021 BMW 5 Series but Apple is working on standards with industry groups to get it working on other cars, said Federighi. “We expect to see support for this standard starting in new cars next year.”

Digital car keys can be easily shared using Messages, or disabled through iCloud if a device is lost. Apple also unveiled the next generation of digital car keys based on Ultra Wideband technology for spatial awareness delivered through the U1 chip, which will allow users to unlock future car models without removing their iPhone from their pocket or bag.

iOS 14 comes out in September 2020, coinciding with the expected release of the iPhone 12. The beta version of iOS 14 is out now for developers and a public beta will be available to iOS users next month at beta.apple.com.

Will it work on your phone?

Vomle is a journalist who enjoys writing about people doing interesting things in New Zealand and abroad. She was most recently editor at noted.co.nz.