Research from NZIER and Xero suggests billions in productivity gains could be achieved by accelerating businesses' move to the cloud - but businesses may need incentives to speed up the migration.

A 20 per cent increase in uptake of cloud computing services could boost GDP by at least $3.5 billion according to online accounting software maker Xero, which is calling on the government to help spur the move online.

Listed on the Australian Stock Exchange and with over 2 million subscribers around the world, Xero’s core business is offering accounting and financial software for small and medium-sized businesses.

But its partner ecosystem of cloud-based apps that plug into Xero gives the company a unique insight into how smaller businesses are taking to the cloud. From his base in Auckland, Xero’s New Zealand managing director has noticed one concerning thing about his home market – our businesses are lagging Xero users overseas in using the apps that leverage Xero.

“We’ve got over 800 solutions that sit in our ecosystem, and a lot of them are global,” says Hudson.

We are able to see the rate of small business attachment to those ecosystem partners in the likes of Australia, the UK, the US, Canada and through Asia. New Zealand is lagging behind the majority of those countries,” Hudson adds.

Our tardiness in embracing cloud solutions is a problem, according to Hudson, because it is limiting businesses’ ability to achieve productivity gains and to grow.

We know from our data, for instance, that if you’re using Xero plus one other cloud solution, whether it be Vend, Unleashed for inventory, or Shopify to be able to shop online, your net profit increases and your employment hiring right increases compared to those that just use Xero,” Hudson explains.

Now Xero has done some work to try and quantify what the gains could be for the economy if uptake of cloud services accelerated beyond Xero’s ecosystem to span the range of daily tasks that are part of running a small or medium-sized business.

In a study by the New Zealand Institute for Economic Research, commissioned by Xero, economists found that a 20% increase in the uptake of cloud computing would be an increase of real GDP by between $3.5 billion and $6.2 billion, equating to 1.2 – 2.4 per cent of GDP each year.

Other significant gains worth billions of dollars would also come in increases in real wages, household spending and boosted exports.

The modelling NZIER did saw the gains coming through factors like improved economies of scale and accuracy of information, reducing manual inputs, improved time management and freeing up time to focus on management and strategy.

“Insight into cash flow is imperative to be able to make sure that your whole supply chain is managed from end to end,” he says.

“If I am a wholesaler or a manufacturer, I need to intimately know what stock is on hand and what my inventory levels are.”

New Zealand has long been acknowledged as having a “productivity gap” – we work harder than other OECD countries for less output.

“Productivity kind of as a dirty word, because there are negative connotations that come with it,” Hudson admits.

Productivity gains are often associated with doing more with less, which could mean fewer employees working harder. But Hudson says the goal with productivity gains is actually something different – and less threatening.

“So if you reframe that, it is businesses adopting processes that speed up and give them insights to make better decisions for tomorrow,” he says.

Being able to gain insights in real-time and make changes based on the current state of the business is a huge advantage for a business owner, says Hudson, a former professional rugby and Sevens player who ran a small business himself before joining Xero.

“Every 20th of the following month, I’d get a management report or pat myself on the back and pat the team on the back.

“But it was too late for me to be able to make any strategic changes when things didn’t go so well when maybe we should have done something about it,” he says. 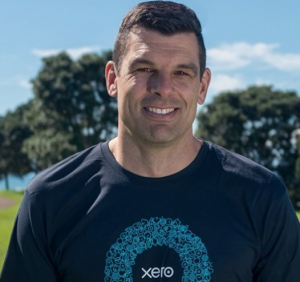 The cloud had given rise to a host of apps and services that made data-driven decision making easier, but New Zealand’s 515,000 small and medium-sized businesses, which represent up 28 per cent of GDP and 29 per cent of the workforce, had been relatively slow on the uptake.

The barriers to moving to the cloud identified by Xero and NZIER include a lack of skills and knowledge, concerns about security and privacy of information in the cloud, infrastructure needs and perhaps most significantly, cost.

Most cloud services are subscription-based, with the recurring fees off-putting for many small businesses. Hudson acknowledges that cost is a major factor holding back the move to the cloud.

He advocates making government subsidies available to allow companies to lower the cost of adopting cloud technologies. Other countries have done so. Singapore for several years offered tax deductions and cash payments to boost investments in innovation and productivity-enhancing technology.

More recently, it has made available grants to small businesses to move to cashless payments, partly as a health and safety measure in the time of Covid-19. Many hawker stalls in Singapore’s bustling markets were still only accepting cash and the grants allowed them to take electronic payments for the first time.

“30 per cent said they’d take it tomorrow and move [to the cloud],” says Hudson.

He says without some incentives to change, it may take a decade or more to achieve a 20 per cent increase in the use of cloud technologies.

“It will bubble along, then get to the saturation point that we think we might get to where it will be meaningful. But how do we do it in three years?”

“We have a massive opportunity, maybe a once in a business generation, to be able to really leapfrog our small business economy or beat or some of the other places in the world.”

Hudson praised the Government for its rapid action on making the wage subsidy and other stimulus measures available to businesses to help them weather the pandemic, but he said that we also need initiatives that will put the economy on a stronger footing longer-term.

What a 20 per cent increase in uptake of cloud computing would mean for the economy: