If you want to live in a fair and just democracy, you need to be able to examine how decisions are made by the public agencies that represent our interests.

That’s where the Public Records Act 2005 comes in. The legislation applies to every public office – be it a government department, a state-owned enterprise or a local authority. It governs how public records are created, managed, stored and eventually deleted or archived.

Ultimately, it helps determine whether precious taxpayer dollars are being spent appropriately.

But rapidly evolving technology systems and the public sector’s move across the board to remote working as a result of the Covid-19 pandemic, have posed new challenges for agencies when it comes to complying with the Act.

“The intent with this legislation when it was created back in 2005 was to make it technology agnostic,” says Sarah Heal, Director, Operations Manager and co-founder at Information Leadership, which specialises in advising organisations on their information management practices, with a particular focus on using Microsoft 365.

“No one could see back then where the technology was going to go,” explains Heal.

“Now, many agencies are baffled about how to go about dealing with compliance issues, particularly in the context of new tools like Microsoft Teams.”

Microsoft 365 and the public sector – everyone’s using it 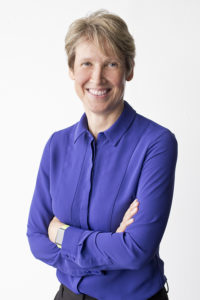 Heal says that most of the configuration settings helping public agencies to stay compliant with the Act are available in Microsoft 365.

“Where the complexity emerges is in actually understanding how to put those pieces together and deliver that across the organisation,” she says.

The whitepaper covers everything from setting up rules for retention and disposal of documents, dealing with metadata, to assigning deletion authority and applying the compliance framework across Microsoft apps such as SharePoint and Teams.

“What we’re seeing is that Teams is increasingly the new interface into SharePoint and indeed, into a whole lot of other systems that you might have in your organisation,” Heal says.

“It really is the kernel of this new way of working.”

At its heart says Heal, the Public Records Act focuses on accountability, transparency and governance in two key areas – creating and maintaining records, and disposing of records.

“It’s not designed to make you do something that you wouldn’t normally do as part of being a well-run organisation,” she says.

To dispose of records, public agencies needed to get the approval of the Government’s Chief Archivist, Kaipupuri Matua. The Act is also important to another key piece of legislation that thousands of people draw on every year to gain insights into government decision making – the Official Information Act.

If an organisation gets an OIA request and its records haven’t been well maintained or they haven’t made records, it’s hard for them to answer that question,” says Heal.

The volume of information held by public agencies is growing and comes in a broadening range of formats, that can include video files, geographical data and more detailed metadata.

Compliance with the Act also has an audit element, with the Chief Archivist auditing each public office’s record-keeping practices every five years or so.

“Compliance isn’t something you have, it is something you do,” says Heal, who notes that every public sector organisation must have an executive sponsor for information management. 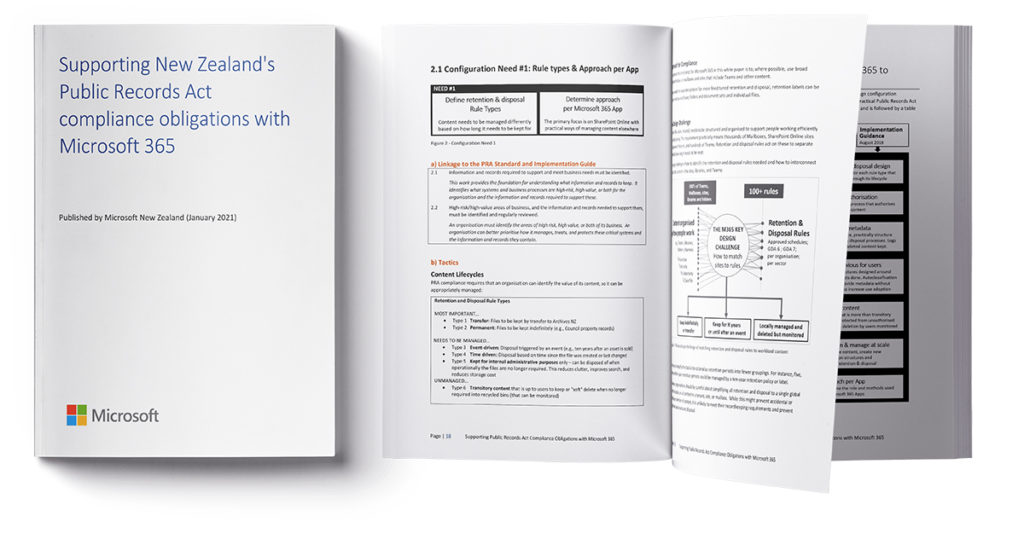 One of the benefits of working with Microsoft 365 for information management is the breadth of its capabilities, she says.

“Using Microsoft 365, there’s also a lot of stuff we can actually automate, so if we do it right, we can actually make the jobs of the information managers much easier.”

Those information management tools and settings are included in Microsoft’s key licences for Microsoft 365, adds Heal.  She estimates that for a typical public sector organisation, a well configured 365 tenancy with an E3 licence would allow around 50% of files to be retained and disposed to the standard needed. With an E5 licence this jumps to over 95%. The key is designing Teams and SharePoint for this right from the start, with information managers easily adding the correct retention rules as part of the design.

Information Leadership is currently running a series of workshops in main centres around the country covering practical retention and disposal of information for M365 and Teams. The workshop has been well-received, with 80 previous participants giving it a rating of 8.7/10.

A free on-demand webinar is also available looking specifically at Teams and the Public Records Act. Information Leadership’s work in helping organisations keep on top of information management has seen it awarded Microsoft’s Empowering Employees Partner of the Year two years running, in 2020 for a project with Tasman District Council and in 2019 for work with Todd Energy.

Register for an upcoming workshop