As employers get to grips with staff working from home on a regular basis, there’s the potential for bosses to take on the characteristics of Big Brother.

An inclination to turn to device-based monitoring tools to check whether staff are productive and present during traditional office working hours is understandable.

But a new survey of New Zealand consumers suggests there’s little tolerance for monitoring of their productivity while working from home and experts warn that in the age of the Great Resignation, employers demanding such measures risk losing staff.

The annual Unisys Security Index survey, now into its 15th year and which surveyed 11,000 consumers in 11 countries, including 1,000 in New Zealand, shows Kiwis clearly rejecting monitoring for productivity, security or support purposes.

The self-employed and small business owners were the most comfortable with monitoring. 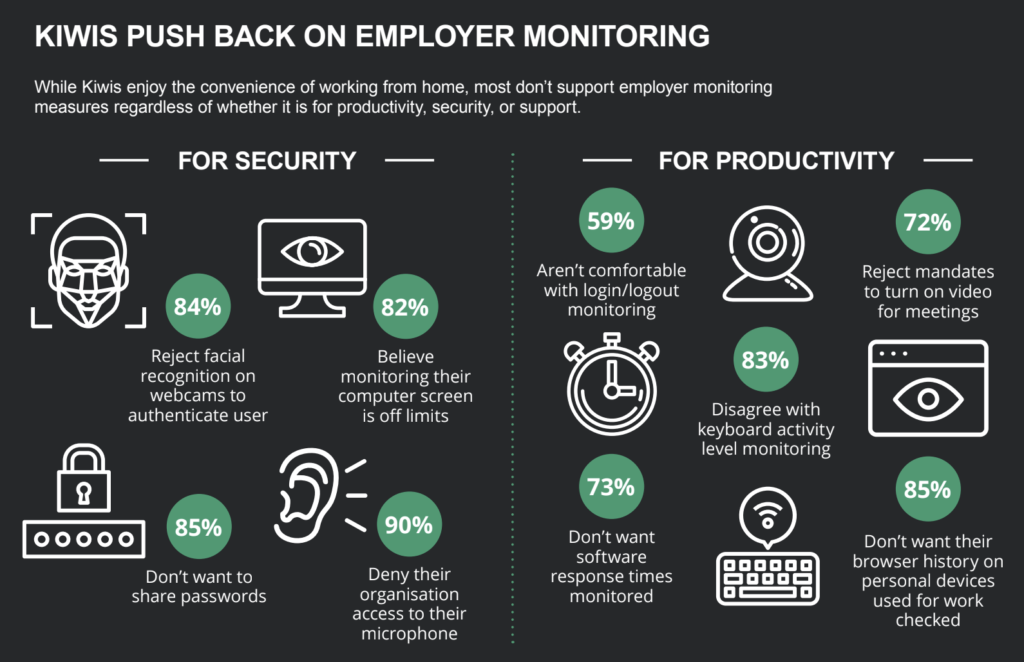 “It’s producing a sense of nervousness rather than a sense of safety and this is clearly something that we need to educate around. But that education begins with a conversation.”

Office workplaces are in the process of being “exploded”, says Pesce. Employees are demanding more flexibility after around 600 days of living with the pandemic and its disruption. With labour shortages in many industries, a high-trust, low monitoring work environment could make the difference when it comes to retaining and attracting staff.

Outcomes are considered to be what a business needs to achieve, be they sales targets, project completion or strategy goals. Outputs are the actions that contribute to achieving the outcomes. It effectively means that if working from home means you do less face to face meetings with customers or write fewer reports, it doesn’t matter as long as you are hitting your goals.

There’s also likely to be less emphasis on inputs – the actual amount of time workers devote to tasks. Again, if you can find a more time-efficient way of doing something that achieves the desired outcome, what does it matter?

Leon Sayers, director of advisory at Unisys in Asia Pacific, says not all monitoring has the sinister whiff of Big Brother. For instance, monitoring software response times could be used to proactively fix bugs slowing down a user’s computer. 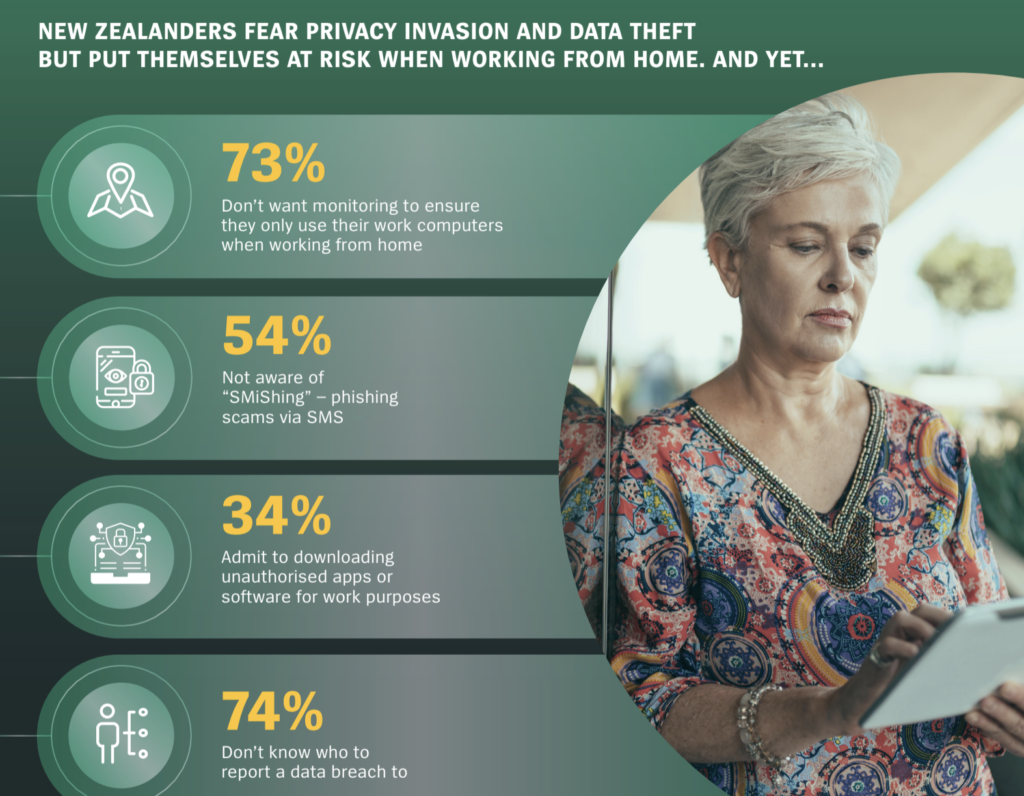 Facial recognition served a genuine function allowing people to log onto their computer without having to enter a password.

“But adding new function and purpose to an existing tool requires a fresh conversation,” he warns.

“We accepted webcams at home to aid collaboration – not security. Employers need to lead open discussions about the intended purpose and benefit of such measures if they are to be accepted in the home workplace.

“If someone’s able to deliver the outcomes, it doesn’t matter if they work seven hours rather than 10 hours a day, as long as they’re delivering the outcome,” says.

For monitoring that is put in place, it is essential that there is transparency around what metrics are being gathered. Tight control should be exerted over who in the organisation has access to monitoring data.

“If a boss needs to look at whether someone’s being productive, then that should be a conversation with [human resources], who then approves that person being able to look at the content instead of content just being natively available to everyone,” says Sayers.

The Unisys Security Index is primarily aimed at benchmarking security-related concerns among consumers across the world. On that front, the New Zealand public recorded 140 points on a scale going up to 300 gauging concern over security issues. That’s the highest level since 2017, but up just four points since last year, a period during which ransomware attacks and “smishing” SMS scams dominated tech-related headlines.

Pesce says the data suggests Kiwis are “very sanguine” about whether we are going with our online security, compared to consumers in other countries. New Zealand had the fourth-lowest level of concern among the 11 countries surveyed.

Our biggest security concerns are identity theft, hacking and viruses and bankcard fraud.

For Lean Sayers, the survey results also point to the very real security threats that arise with the working from home movement. He personally has a room free of home devices which he uses to make sensitive calls or video conferences on a work machine, to reduce the potential for unauthorised eavesdropping.

“In a corporate environment, you don’t have a Ring doorbell or your Google devices and your Alexa devices,” he says.

“People hook all of these different peripheral devices into the same Wi-Fi network that they’re using for their work and which their kids are all using.”

“I think that the home network environment is really going to be the next target and I think we’re going to see a ramp up on attacks in the home environment with home technology a stepping stone, if you like, into the corporate world.”