Why reinvent the wheel? Low and no-code approaches and the rise of citizen developers

The urgency to speed up application development and a software development skills-shortage is fueling the rise of low and no-code platforms. New Zealand companies are taking notice.

At the height of the fruit-picking season last summer, a Hawkes Bay orchardist I know had a bright idea.

Employing dozens of seasonal workers to harvest fruit in the orchards, he needed a better way to record exactly how many hours each worker spent picking fruit. The clipboard and paper-based system the head pickers were using wasn’t cutting it any more as the harvest workforce expanded.

People would forget to record workers’ hours and it required someone to manually enter all of the data into an Excel spreadsheet back at the office. My friend looked at subscription-based clock-in, clock out systems, but they all seemed a bit too complicated and expensive for his needs.

Then he stumbled across Power Apps. It’s a platform Microsoft launched in 2015 that lets users of packages like Dynamics 365 and Office 365 extend their functionality by easily developing add-on applications. Normally that would require a computer programmer to get involved. But Power Apps is a no-code solution. It’s based around a series of menus and drag and drop screens. The code is automatically created in the background.

The orchard owner’s office manager set about building a mobile check-in app for the orchard workers. It took just a few hours to create the app and populate it with the forms, fields and checkboxes needed. The following week, pickers arriving at the orchard entrance began signing in digitally on a tablet computer. They also check out at the end of the day on the device and the app can be used to serve up health and safety reminders and company updates. 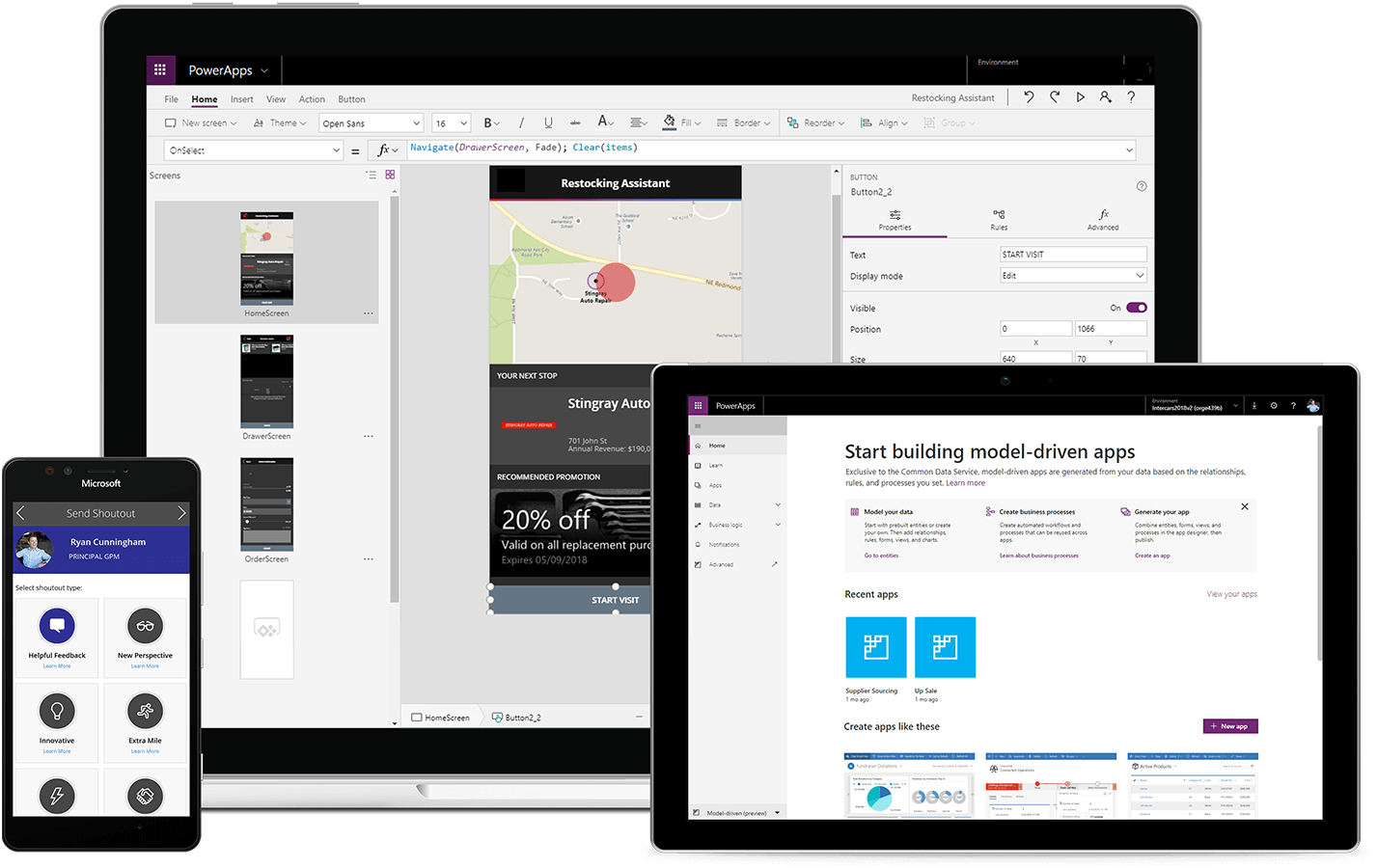 All of the data detailing each worker’s hours are now automatically fed via the app back to Excel in Office 365 where it is used for managing payroll and workforce scheduling. Virtually no extra cost was involved in deploying the app, just the time required to set it up.

PowerApps builds on a concept Microsoft first developed in the 1990s with Visual Basic, its tool to let users create business applications with a visual form builder. Power Apps, in the era of the cloud and mobile apps, takes it to the next level, particularly for mobile applications that tap into Office and Dynamics functionality. 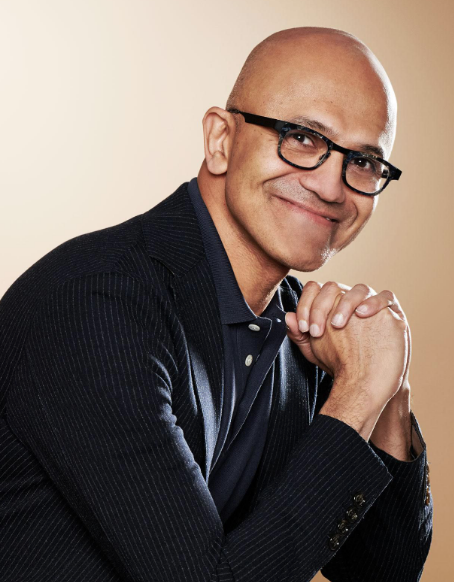 “500 million new apps will get created in the next five years and more than the total created in the last forty,” Microsoft Chief Executive, Satya Nadella, said last year.

There simply aren’t enough software developers to meet the demand for new apps and modernize those that businesses already rely on. The only way to facilitate that proliferation of apps, argues Nadella, is to enable ‘citizen developers’, people who know their organisation’s business requirements but have never had anything to do with Java, Python, C or JavaScript.

As such, PowerApps is just one platform offering no-code options for app development. Other platforms, similarly built around visual app-builders and drag and drop components, include Oracle’s Visual Builder to leverage Oracle Cloud functionality in apps, Salesforce and AppSheet which was acquired by Google in January.

A number of other no-code app platforms not aligned with any big tech player have emerged, including Monday.com, Airtable, Kissflow and Quick Base. They are tapping into that demand for citizen developers. But the no-code approach, while enabling a new wave of faster application development by the very people who understand the business objectives, by nature has its limitations.

Anyone who has used a visual drag and drop website builder like Squarespace or WordPress knows the limitations of the one-size-fits-all solution. There’ll often be some quirky little requirements a business has, often related to the need to maintain legacy systems, that can’t be shoehorned into a templated system. As such, for many mission-critical systems, organisations still want to be able to have developers tinker with the code.

That’s why no-code platforms aren’t intended to replace software developers entirely. Low-code platforms are equally experiencing major growth. Rather than replacing coding entirely with visual app builders, wizards and menus, they use those sorts of interfaces to make the developer’s job easier and lessen the amount of code that needs to be produced. The aim here is efficiency in app development. 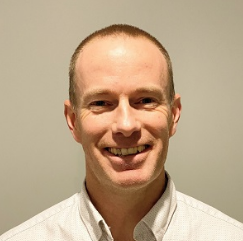 Low-code platforms include Appian, Boomi, Lansa, Pega Systems and Out Systems, with many of the no-code platforms mentioned above offering developers low-code options too.

“Low code has a low-risk profile and given the current economic conditions, being able to deliver digital transformation in much smaller and faster increments, makes it easier for my CFO and CEO to manage capital expenditure and budget exposure,” says Sam Parker, General manager IT and Digital for Profile Group Ltd., New Zealand’s largest manufacturer of windows and doors.

Parker considered PowerApps as a low-code solution to modernizing the company’s business applications, before settling on Out Systems, a platform initially developed in Portugal and now US-based.

“There’s a fantastic ecosystem of pre-existing components we are able to use.”

Profile Group has an enterprise resource planning (ERP) system, ordering and estimation tools as well as a number of customer-facing apps. Increasingly, says Parker, additional development will be done in Out Systems in conjunction with local partner Experico.

“We are going to bring Out Systems in and overlay it, using it to replace a number of our business productivity tools and find a new way of connecting with our customers,” he says.

A Harvard Business Review report looking at the rise of low-code platforms, suggests they are increasingly part of a “dual-track” approach to digital transformation in businesses. There are the largescale projects that are expensive, take a long time, but have real transformative potential.

Then there are the smaller, incremental changes that increasing don’t require coders to get involved.

“This second track empowers business professionals outside of IT to propose and create new applications for modernizing existing workflow processes, with the goals of achieving quick wins for the business and supporting long-term transformation,” the report notes.

Harvard Business School argues that this dual-track is the way forward. With Covid-19 requiring businesses to quickly adapt and change their IT environments to meet the needs of customers, the second track is likely to get growing attention.

Indeed, San Francisco-based analyst group Grand View Research said this week that the low-code application development platform was worth US$11.45 billion last year and is expected to experience average growth of 23% from 2020 to 2027.

Small businesses through to large enterprises will equally adopt low-code solutions as businesses big and small realise that their workforce now have within reach the tools to allow them to become citizen developers.