Investments by Amazon and Microsoft point to a market with strong growth potential in the digital space, pandemic resilience and faith in our local networking infrastructure.

After years of serving up cloud computing services largely from abroad, the two largest cloud players, Amazon and Microsoft, are making serious investments in local infrastructure.

Microsoft surprised everyone during the depths of lockdown by announcing it would create its first Azure cloud region here as part of a push to extend its data centre network around the world. That was a move significant enough to require Overseas investment Office approval and an estimated $100 million spend on building a data centre in Auckland that will come online in the next year.

Perhaps influenced by that well-received news, Amazon Web Services last week announced its first edge location in Auckland. While not as significant as building a fully-fledged data centre, having an edge location will likely offer a significant performance boost for local AWS users.

It essentially lets them have their cloud-hosted content cached securely on servers in Auckland and integrated directly into the AWS international network. Amazon is claiming an up to 50 per cent improvement in latency as a result of access to that edge location.

That will appeal in particular to streaming video providers and anyone offering real-time applications. New Zealand AWS customers’ content and applications will still reside on data centres offshore, most likely in Sydney, but have copies of that content held locally for quicker access. Netflix and other content providers also cache content locally for better streaming quality and lower bandwidth costs.

Google is yet to build any edge locations or data centres here but, it is probably just a matter of time. It has announced new cloud regions are coming for Warsaw (Poland), Doha (Qatar), Toronto (Canada), Melbourne (Australia), Delhi (India), Paris (France), Milan (Italy), Santiago (Chile), and Madrid (Spain). 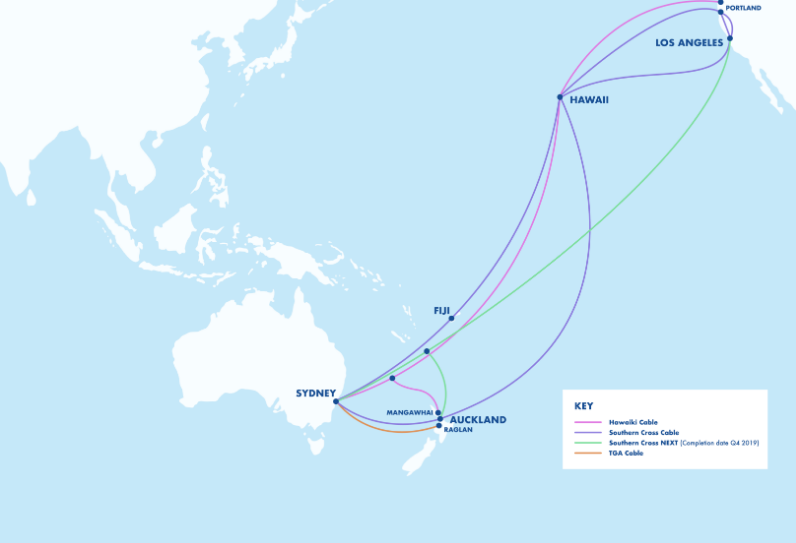 Our international connectivity has improved dramatically

At the same time, we are seeing our local cloud providers beefing up their own capabilities. Datacom, which is probably the largest local data centre operator, last year invested $52 million in expanding capacity by 40 per cent in its data centres in Auckland, Wellington, Hamilton and Christchurch.

All of this has come in a period of economic uncertainty, the likes of which we haven’t seen in a decade.

So what’s going on? Here are eight reasons why New Zealand is attracting a flurry of cloud infrastructure investment.

– Decent broadband: A decade of investment in building out fibre access to over 80 per cent of the country, as well as upgrades to backhaul networks, has served us well. It has allowed us to overcome many of the access bottlenecks that otherwise make it more attractive to hold onto on-premise server infrastructure rather than shifting everything to the cloud. Our improved infrastructure extends to our international connectivity, with four major cable networks now connecting the country, offering more competitive bandwidth services and pricing.

– Our appetite for tech: After a sluggish start taking to cloud platforms compared to other countries, we are now accelerating our digital push and uptake of information and communications technologies. That’s reflected in the most recent World Economic Forum’ Global Competitiveness Index rankings for 2019. While New Zealand dropped one place overall, when it came to ICT usage, we moved up two places to 21st out of 140 nations worldwide. We may be small, but our growing appetite for technology is an opportunity for cloud players.

– Vendor FOMO: AWS and Microsoft may already have significant cloud business here while sending our data to offshore locations. But they are facing strong competition from rivals such as Google, IBM and Alibaba Cloud. IBM announced this week that it would be spinning off its legacy IT business so that it can focus on cloud computing and artificial intelligence services based in the cloud. Alibaba Cloud has been aggressively growing its footprint in Asia Pacific. Cloud companies are investing to keep customers loyal.

– Data sovereignty: There is still an imperative in government and among Māori and iwi organisations to have data hosted locally. This gives an advantage to our local cloud providers, but one that the likes of Microsoft are neutralising with local infrastructure and a commitment to keeping sensitive data onshore. If anything this trend will intensify as data privacy regulations are strengthened.

– Growing revenue: The cloud players realise that having local infrastructure that improves the performance of their platforms is more like to encourage customers to use their AI, IoT (internet of things) and data analytics tools as well. Alibaba Cloud said this month that it is likely to become profitable on the back of value-add services such as AI tools and data analytics.

– Flagship clients: Some of our biggest and best-known companies are going all-in on the cloud and that means big business for cloud players demonstrating a commitment to local investment. Weta Digital recently signed a deal to move most of its visual effects work to AWS and Fonterra in July announced a similar deal with Microsoft.

– Green computing: AWS, Microsoft and Google are under serious pressure to reduce their carbon emissions from all those data centres and subsequently have been seeking out cleaner sources of energy to power them. New Zealand’s abundance of clean energy makes us an attractive location to host infrastructure, a situation only likely to improve as the government mulls a pumped hydro scheme to help take us to 100% renewables-based electricity generation.

– Covid-free status: Microsoft and AWS as well as the local players could have paused their cloud investments amidst the uncertainty of the pandemic. But they chose to forge on, no doubt inspired by New Zealand’s ability to contain Covid-19 and return to a sense of normalcy in a world where the pandemic still rages.