With six trading brands, 270+ stores, a successful e-commerce presence, and more than 12,000 employees spread across its network, The Warehouse Group (TWG) is one of the largest retail groups in New Zealand.

As previously published on the Megaport blog

As recently as 2017, all of TWG’s infrastructure was hosted on premises, with around 500 virtual machines installed at its centralised location, and another 500 distributed throughout its store network.

Following a company-wide initiative aimed at exploring options for cloud services, TWG made its first pilot migrations off-premises. This small cloud experiment quickly exploded into widespread adoption – but this rapid journey introduced its own challenges.

For example, using cloud APIs to manage the front-end for a number of its on-premises services meant introducing a VPN. And when TWG introduced another cloud provider into the stack to take advantage of its advanced analytics capabilities, even more VPNs were needed to connect from Auckland to the Sydney-based region.

With automated VPN services outside its budget, the TWG team decided to continue managing each individually, with manual configuration – a major investment of time and resources. As the traffic was travelling between TWG’s hub in New Zealand to the cloud provider in Australia, the development teams started experiencing high latency and bandwidth limitations.

The team found itself maintaining multiple IPsec tunnels over public internet – which required extra hardware – and manually creating a new VPN for every connection. This led to parts of the organisation waiting for up to 10 weeks for new services to be provisioned, which was affecting the IT department’s strategic role in the business.

To overcome these challenges, TWG took the opportunity to formalise its cloud adoption strategy. This led to the retail group selecting another cloud provider as its preferred platform, retaining instances of its initial platforms for now-established functions and workloads.

Now, with such a diverse multicloud environment, plus complex connectivity requirements between countries, TWG had specific requirements that its network monitoring and management solution needed to match.

After discussing the organisation’s needs with a solution architect, it quickly became clear that a service that provided easy circuit provisioning, dynamic bandwidth control, and diverse cloud connectivity would be critical in helping TWG simplify its network management. As a leader in the market with a strong reputation, Megaport was the ideal choice.

“Without Megaport, we were constrained to dedicated WAN connections from our existing service providers on fixed-term contracts. Compared with traditional service providers, Megaport offers us much better flexibility, which not only fits our business model but also allows us to rapidly deliver services to better serve our business units, and ultimately helping Kiwis live better every day.” – The Warehouse Group 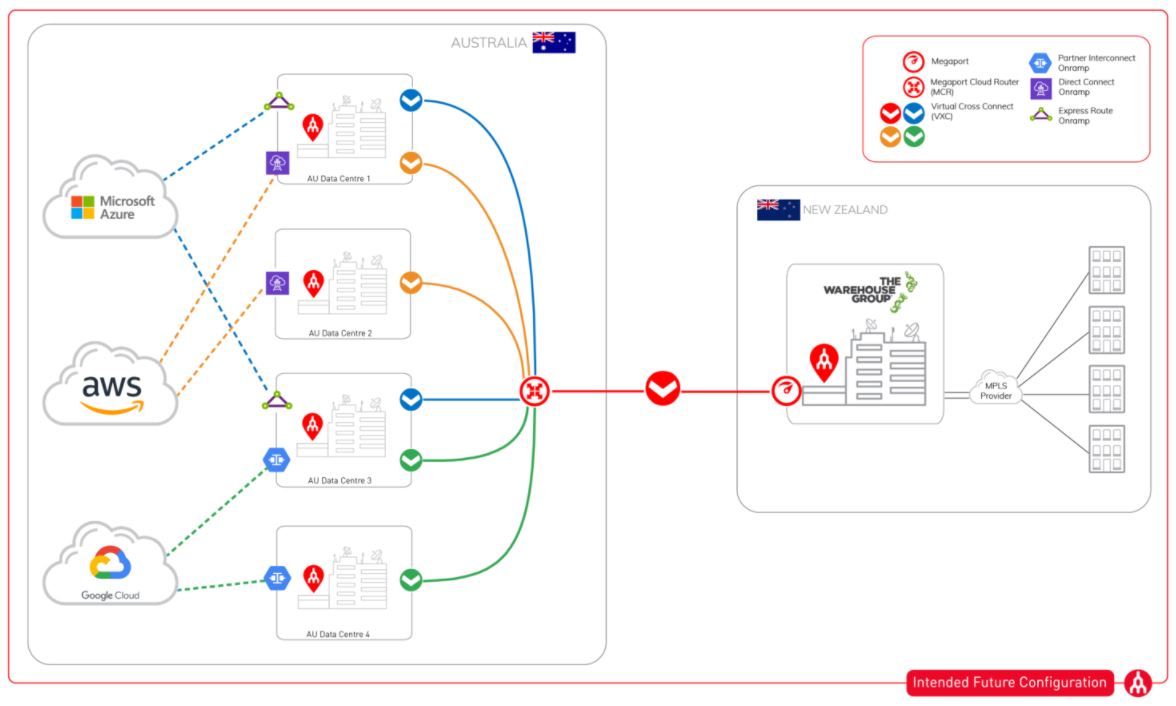 Next, it plans to integrate its new multicloud environment with its international suppliers, including its CRM and global sourcing software. The retailer is also looking into API development, both to connect with the marketplace and automate its bandwidth provisioning processes.