Microsoft always likes to have something big and exciting to wow its partners and it was no different at Inspire 2021 as the software giant revealed an intriguing twist on its flagship operating system, Windows.

A new offering, Windows 365 Cloud PC, will take Windows 10 and the upcoming Windows 11 to the cloud, offering them as a virtual operating system that can be accessed from any device – laptop, desktop, tablet or smartphone, via a HTML5 web browser.

Instead of managing Windows on their computer, users will draw on the massive computing power of Microsoft Azure cloud platform, renting access to a configuration of processing power, memory and data storage that suits their needs, with the ability to scale up or down as needed. The maximum configuration supported involves eight processors, 32GB of RAM and 512GB of storage.

Microsoft Chief Executive and Chairman, Satya Nadella, described it this week as a “new category” of computing.

“Just like applications were brought to the cloud with SaaS [software-as-a-service], we are now bringing the operating system to the cloud, providing organisations with greater flexibility and a secure way to empower their workforce to be more productive and connected, regardless of location.”

It involves a monthly Windows 365 subscription, mirroring the business model of Microsoft 365, which is now the default way millions of users access Microsoft’s Office productivity suite. There will be enterprise and business versions of Windows 365, with it becoming available for organisations with thousands of seats, down to small businesses and even one-person operations. Pricing for Windows 365 will be announced on August 2. 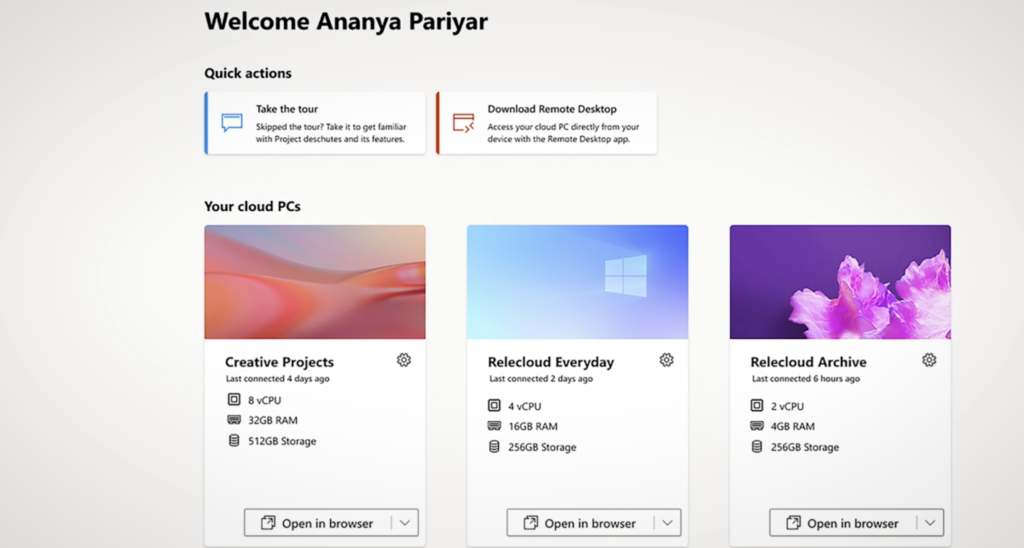 Launching Windows 365 with the click of a mouse button

Windows 365 is effectively a version of Microsoft’s existing Azure Virtual Desktop which allows businesses to serve up Windows to its users remotely. Windows 365 does not replace that service. Instead, says Microsoft, it is aimed at the 80% of users who just want to access their apps and data on the Windows desktop wherever they are: ie the millions of office workers currently adjusting to the new normal of hybrid work.

It means, for instance, the set-up on your workstation in the office can be exactly replicated at home or anywhere you happen to be, because you are simply streaming it from a server at Microsoft. You can literally pick up where you left off on a new device, with all the settings and layout of your apps replicated.

The key benefit from an IT management standpoint is that it will make provisioning of computing services much faster – you could simply give new employees or contractors a username and log-in to get them set up on Windows on their own device.

But that’s currently the domain of in-house IT teams and managed IT systems providers offer. Won’t Windows 365 erode a chunk of their business? To some extent yes, but it is really not much different from Microsoft 365 and even Microsoft moving businesses from on-premises and private cloud set-ups to its own Azure platform.

Let’s face it, provisioning devices and desktop environments is a pretty low-level if essential activity. If instead you can just ship a device to a new employee and give them a log-in to Windows 365, that promises to make managing large device fleets easier for IT managers. Still, Windows 365 is a SaaS play.

There’s no real way for partners to add value to the product itself, something that is possible with Azure Virtual Desktop. Cloud solution provider partners will be able to bundle the subscriptions up with the current collection of Microsoft products they are providing their customers. 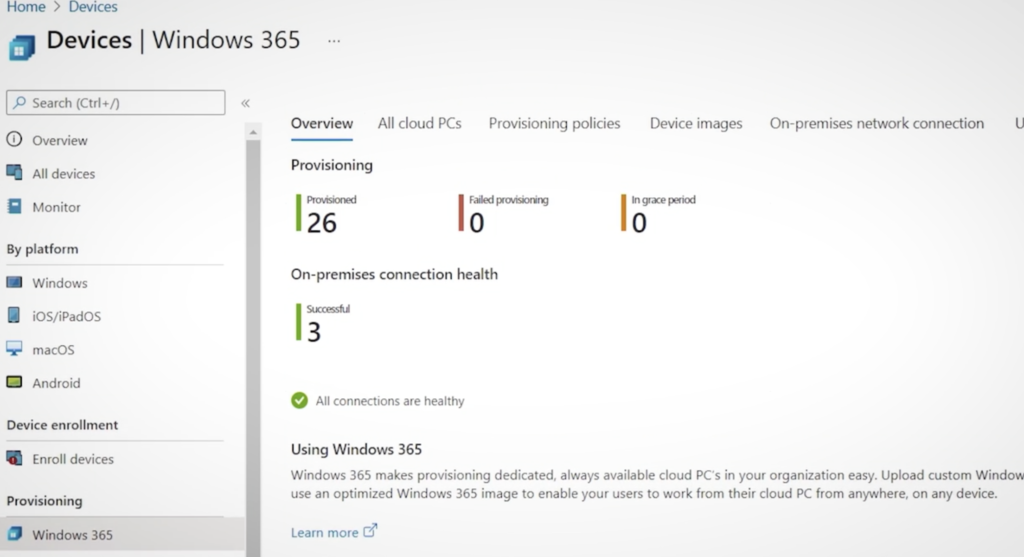 Making the most of the Windows estate

Ultimately, says Nick Partner, Microsoft’s corporate vice president of partner solutions, it gives IT providers a valuable tool to help their customers extend the use of Windows beyond their office locations.

“Systems integrators (SIs) and managed service providers (MSPs) can help organisations get the most out of their entire Windows estate,” Parker said this week.

“Independent software vendors (ISVs) can continue to build Windows applications and deliver them in the cloud to support their customers’ ongoing digital transformation journeys. Device and silicon partners gain an opportunity to integrate Windows 365 into their broad portfolio of services alongside their devices’ robust features and secure hardware,” Parker continued.

So there’s no major licensing or reselling opportunity here, just a chance to ease companies on their digital transformation journey. It doesn’t lessen the tension around Microsoft increasingly doing itself more of what IT service providers have done for decades as skilled middlemen.

But it reinforces the need for them to move up the value chain and leverage Microsoft’s extensive range of products and platforms to focus on the areas where the customer needs a tailored approach to app development, security or infrastructure management.

Elsewhere, there were some interesting announcements at Inspire that will open up opportunities for partners and their customers alike.

Five other big announcements from Inspire 2021

Teams and Dynamics 365 get friendlier

If you are a user of Teams, Microsoft’s fast-growing collaboration, messaging and communications platform, you can now view and edit data from Dynamics 365 within the Teams app, even if you don’t have a Dynamics 365 licence. That’s potentially very powerful, unlocking the serious power of Dynamics to a wider set of people without increasing licensing costs.

It means for instance, you could look through customer information in Teams while on a Teams call, rather than having to flick back to Dynamics 365. That will make lives much easier for people at organisations where Dynamics is at the heart of their finance, customer relationship management or enterprise resource planning operations. Crucially, administrators will be able to set permissions around who can access what in Teams.

Opening up the Teams app store

Third-party software makers will from later this year be able to sell apps within Teams, potentially creating a fulsome app store more reminiscent of Google Play and the Apple App Store – for the business world.

Independent software providers will be able to set different prices for customers and cloud service providers, so they can build in margin for CSPs who marketing Teams apps on the ISVs’ behalf.

Microsoft will also reduce fees in its commercial marketplace from 20% to 3%. That continues the trend we saw with the release of Windows 11, where software makers will have the ability to use their own payment systems in the Microsoft Store, allowing them to avoid paying commission to Microsoft. The software giant has realised getting as many apps into the ecosystem as possible will serve Microsoft well in the long run, rather than trying to clip the ticket to a great extent now.

Microsoft has been developing an employee experience platform that will help organisations manage productivity and employee wellbeing in the age of remote working. It will become widely available later in the year and Microsoft said this week it will include integration with 21 vendors, including ServiceNow, Qualtrics and Workday. There will also be Vivia APIs for learning providers, allowing employee education programmes to be offered and managed from within Viva and extended to Teams, Office.com and SharePoint.

Microsoft is adding to its collection of industry clouds, with Microsoft Cloud for Sustainability, a platform that allows organisations to more easily record, report and reduce their greenhouse gas emissions.

The data underpinning such efforts are often siloed across businesses, says Microsoft. Now it will bring the connectors and feeds that allow retail and finance operations to get a complete picture of a firm’s position in the area of sustainability in a new product that will debut later this year. It will appeal to mid-sized as well as large organisations, says Microsoft and allow alerts to be set if emissions reduction targets are unlikely to be met.

This reflects the more specific needs of customers as they progress their digital transformation and need specialised skills from partners to assist them, particularly in managing hybrid cloud systems.