Meshing together – Microsoft’s plans for the Metaverse take shape

ANALYSIS: With its pedigree in augmented reality with HoloLens and strength in workplace collaboration tools, Microsoft is well placed to lay claim to its own slice of the Metaverse.

Mark Zuckerberg may have changed the name of Facebook to Meta last week and explained how the company will spend tens of billions of dollars over the next decade building a successor to the mobile internet – the Metaverse.

But Meta is far from alone among the Big Tech companies in having ambitions to extend its reach into this emerging virtual world. Microsoft has a massive gaming division that specialises in building virtual worlds, though it has steered clear of making virtual reality headsets compatible with its Xbox video games console to date. Its HoloLens augmented reality headsets are widely used around the world, mainly for work-related applications in medicine, design, engineering and many other areas.

One of the most impressive demonstrations I’ve ever had of the type of experiences being touted for the Metaverse was a few years ago at Microsoft’s Redmond where I put on a HoloLens to go on a tour of the surface of Mars, with Buzz Aldrin as my virtual guide.

In another room, I walked around a virtual car showroom looking at a new sportscar from all angles. Later I used the HoloLens to get instructions on how to wire up a wall power socket, indicators hovering in front of me indicating where the wires should go.

In that context, Microsoft’s announcements yesterday at its Ignite 2021 virtual conference should come as little surprise. Microsoft’s CEO Satya Nadella outlined the new Microsoft Mesh platform that will underpin virtual worlds created in the Microsoft ecosystem and upcoming features that will see it come to life in Microsoft Teams. 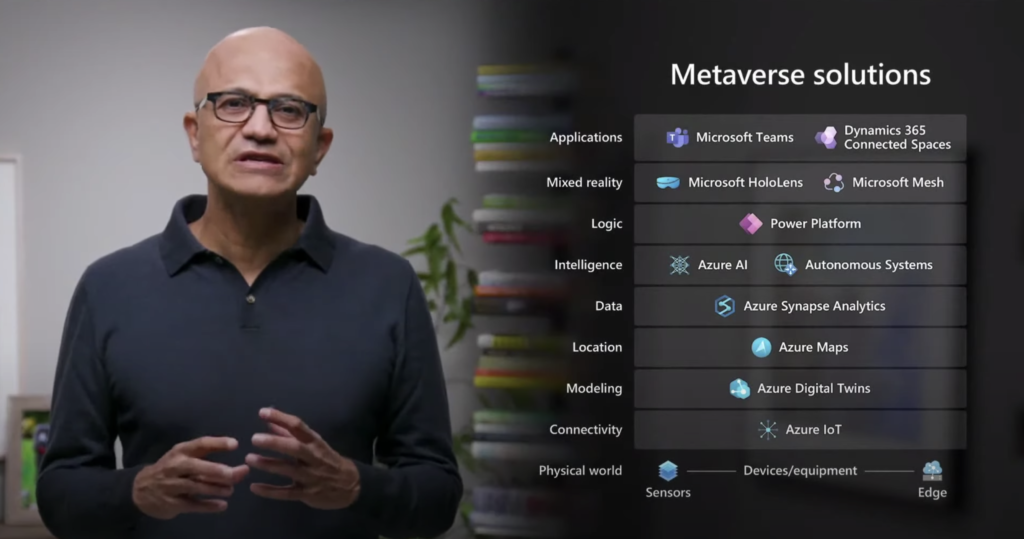 “When we talk about the Metaverse, we are describing both a new platform and a new application type similar to how we talked about the web and websites in the early nineties,” Nadella said.

While Microsoft owns the business networking platform Linkedin, which acts as the default online resume for hundreds of millions of people, it isn’t invested in the ad-drive business model that has made Facebook vastly profitable. In that sense, Microsoft’s Metaverse push is likely to provoke less of a backlash.

However, Nadella seemed to sense the reluctance many will have to work and live more of their lives in virtual 3D environments.

“For years we’ve talked about building this digital representation of the world,” he said.

“What is most important is that we are able to bring our humanity with us and choose how we want to experience this world and who we want to interact with.”

Here are the ways Microsoft is being to build out its concept of the Metaverse.

Microsoft Teams hit 250 million monthly active users in July after a surge of new users joined the collaboration and communication platform during the pandemic. Some users spend hours in Teams every day, so Teams fatigue is a real thing.

Making it more interesting and interactive to be involved in a Teams meeting has been a priority of Microsoft over the last year, with new presenter tools, background designs, video filters, live reactions and Together mode to make larger meetings more engaging.

But in the first half of 2022, all of that will step up a gear with the arrival of Mesh, which was unveiled earlier this year as a virtual platform allowing users to create 3D avatars, hold meetings in virtual spaces, and other XR (mixed reality) capabilities.

It will all be showcased in Teams. At its most basic level, users will be able to appear in meetings for the first time as a digital avatar, something anyone familiar with the AR features of smartphone cameras has probably tried out in the past. 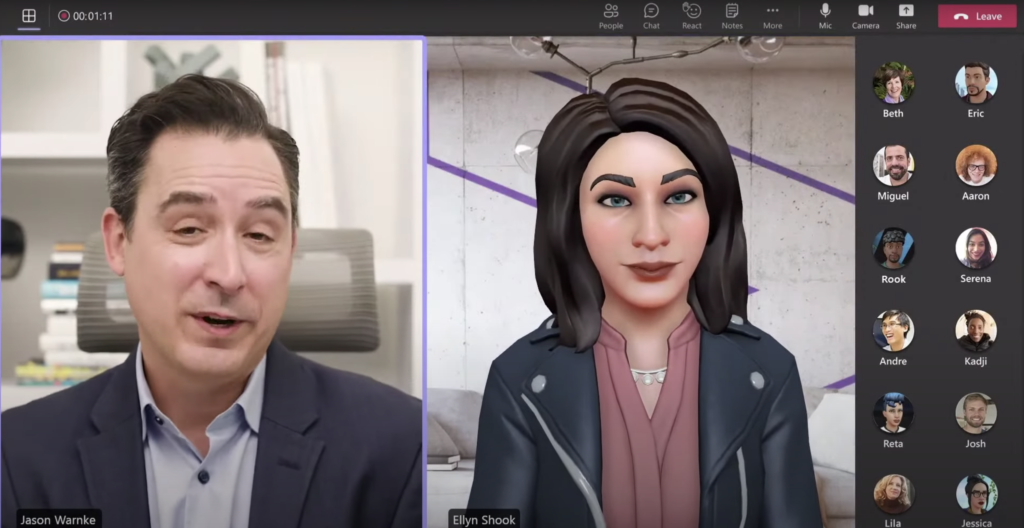 Beyond 2D animation, Mesh allows organisations to create virtual environments that can be accessed using VR headsets or the old way, via a flat screen. Microsoft partner Accenture has been trialling the technology and recently deployed 60,000 headsets among its 624,000 employees.

When it came to Teams avatars, Accenture’s chief leadership and human resources officer, Ellyn Shook, told Nadella that meetings were increasingly featuring a mix of real-life and virtual faces.

“We love this new feature because it gives everybody the flexibility and choice to show up in ways they are the most comfortable,” she said.

“For me, not having to be on camera all day, has really helped with my energy and engagement,” Shook added. 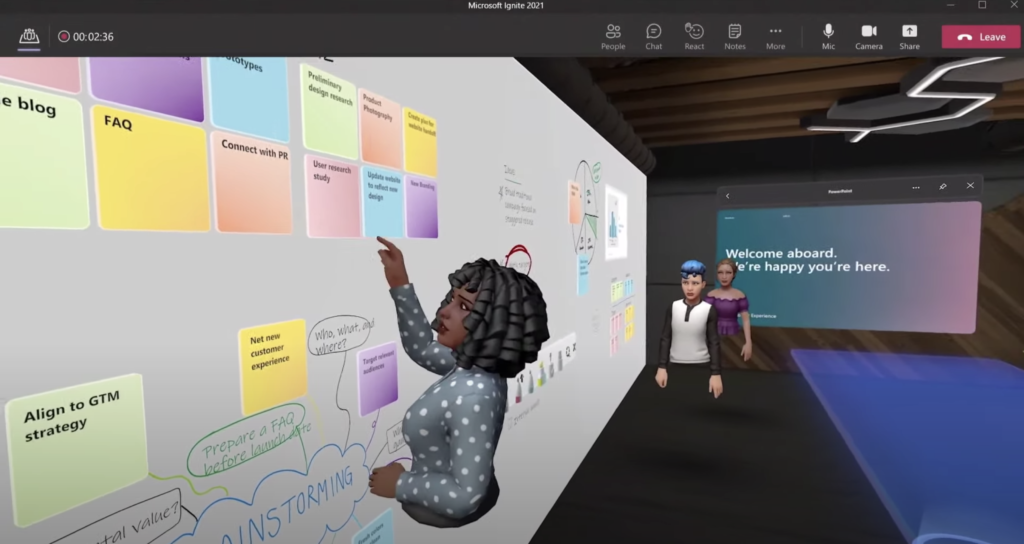 A meeting at Accenture’s virtual headquarters

Accenture had created a digital headquarters where employees could gather to view Powerpoint presentations together, chat around a virtual table and collaborate on documents. The company said 100 events had so far reached 10,000 Accenture employees.

It’s unclear whether Mesh will be a premium service in Teams or part of its core functionality. Getting the most from the experience with require a VR headset, which may put off some users. But Microsoft made clear that it would make the Metaverse accessible in a range of formats so no one was excluded from it.

Alongside Mesh for Microsoft Teams, Nadella teased Connected Spaces, which he said “provides a new perspective on the way people move and interact in physical spaces, whether its a retail store or a factory”.

He previewed a version of Dynamics 365 Connect Spaces for retailers, which allows them to create a digital twin of their retail space, complete with data feeds from cameras and IoT sensors.

“You can do analytics, you can get real-time insights, you can run simulations, you can automate routine tasks,” Nadella said.

All of the information is stored in Dynamics, Microsoft’s finance and enterprise resource planning software suite. Another obvious application of Connected Spaces will be in manufacturing and factory settings.

“It is no longer just looking at a camera view of a factory floor,” said Nadella.

“You can be on the floor. It’s no longer just video conferencing with colleagues. You can be with them in the same room.

Going meta in the enterprise

There’s clearly a lot of depth to Microsoft’s metaverse technology stack, to Azure Maps and the Power Platform, to Azure Synapse Analytics and Azure AI plus Autonomous Systems.

With Microsoft leading the push into enterprise applications in the Metaverse and opening up another front with gaming as well, there’s plenty of potential for strong competition in this new virtual realm even if major questions remain about how interoperable Metaverse worlds will be and how they will operate on a scale that replicates the breadth of the internet.