Microsoft went fully virtual for Ignite 2020 which didn't stop the Redmond giant from releasing a stack of new product updates for everything from Azure to Teams to Power BI.

A host of Kiwi IT pros would typically be preparing to start their long journey home from Orlando Florida this week after several days spent getting up to speed with Microsoft’s slew of new product updates.

But as with the bulk of this year’s flagship tech events, Ignite 2020 was a virtual event, with its chief executive Satya Nadella and other key executives and partners delivering pre-recorded video keynotes in lieu of the conference that attracts thousands of people from around the world.

As the US marked the grim milestone of 200,000 dead from Covid-19, the tone of the video updates was suitably subdued. But there’s no denying that the pandemic and the massive digital transformation it has accelerated, has been good for Microsoft.

The company in July reported earnings that beat Wall Street projections as it became clear demand for its Office 365, Microsoft Azure, Windows, and Xbox product lines increased due to remote working and lockdown provisions worldwide. The company’s share price is up 32 per cent for the year.

But Microsoft has also been quietly working away to consolidate its position as the leading technology provider that touches businesses small and large.

“We are the only company that has a complete technology stack to support both tech adoption and tech capability building, and ultimately increase your own ability to achieve success through digital technology,” Satya Nadella told his virtual audience this week.

“Our tech stack offers unparalleled integration, architectural coherence, and openness in each layer and extensibility. And in this era of intelligent cloud and intelligent edge, it enables truly groundbreaking experiences.”

It’s hard to argue with that and while there was no completely unexpected or game-changing new product unveiled at Ignite 2020, remarkable progress appears to have been made despite six months of dealing with the pandemic when it comes to packing more features into existing products and services.

Here then are five important updates from Ignite 2020 to unpack…

As we know, Microsoft will open an Azure region in New Zealand in the next 18 months and a couple of weeks ago received Overseas Investment Office clearance for what will be a $100 million investment in data centre infrastructure. Microsoft now has 61 data centre regions, giving it the broadest footprint of the big three US cloud providers – AWS, Microsoft and Google.

While increased data centre capacity is integral to Microsoft’s cloud strategy, so is ramping up the functionality of the Azure platform. At Ignite 2020, a number of Azure-related announcements speak to an effort to make Azure relevant to a wider range of businesses.

We saw Azure’s data services fully-enabled for Azure Arc, Microsoft’s service for managing Azure services outside of the Azure cloud platform across on-premises, multi-cloud and edge environments. Nadella said this would give Azure users “the ability to run Azure’s fully managed data services across multiple clouds, data centres and at the edge–even in a fully disconnected state”.

He also gave an update on Azure Synapse, a big data analytics platform released a year ago and operating at “petabyte scale”.

Microsoft has accelerated new feature updates to its Teams collaboration platform as it faced strong competition from Zoom, which in February became the go-to video app for millions of workers suddenly finding themselves in lockdown.

Teams is much more than Zoom, but the flexibility and ease of use of the latter has seen it win fans – even at organisations where Teams is already in use. At Ignite 2020, Microsoft is adding some decent updates to Teams, including new Together Mode scenes which make it look as though all participants of a conference call are in the same room. Coffee shops and conference rooms backgrounds will be added before the end of the year as well as custom layouts to give presenters flexibility around how their content appears to other participants. 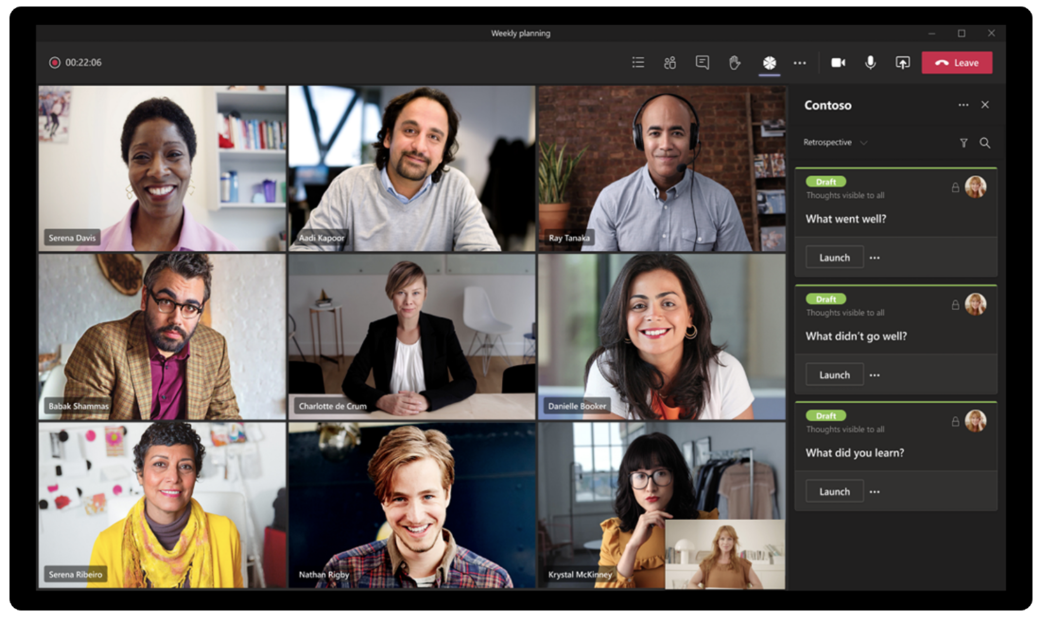 Nadella talked up the strength of Teams for more than just communications.

“With Teams, we are focused on the entire workflow around the meeting–before, during and after. It’s the only solution with meetings, calls, chat, content collaboration with Office and business process workflows,” he said.

“And Teams doesn’t just connect people inside the organisation. It also seamlessly connects you to customers through video meetings, webinars, remote selling, supply chain and other scenarios.”

Some nifty new wellbeing tools would also come to Teams allowing employees and managers to keep tabs on their workloads and signal when they were overloaded or stressed out.

A new billing structure for Power BI (New Zealand specific availability is still to be confirmed), will be offered on a per-user basis making it easier and cheaper for companies to leverage the business analytics and visualisation service.

Another preview added Power BI functionality to Teams allowing users to embed links to reports and dashboards into Teams chat channels. The aim is to foster more collaboration around data visualisations and reports derived from the business intelligence platform.

Nadella pointed to the strength of the Microsoft 365 product set as workers all over the world tried to remain productive in hybrid working environments.

“There’s no question that the PC has become mission-critical during this pandemic–across work, school and life–to sustain productivity in a remote everything world,” he said during his keynote.

“More than 1 billion people now are using Windows 10. And Office 365 usage is higher than ever.”

Microsoft would release new versions of Office for Windows and Mac in the second half of 2021, as well as the next versions of Exchange Server, SharePoint Server, and Skype for Business. 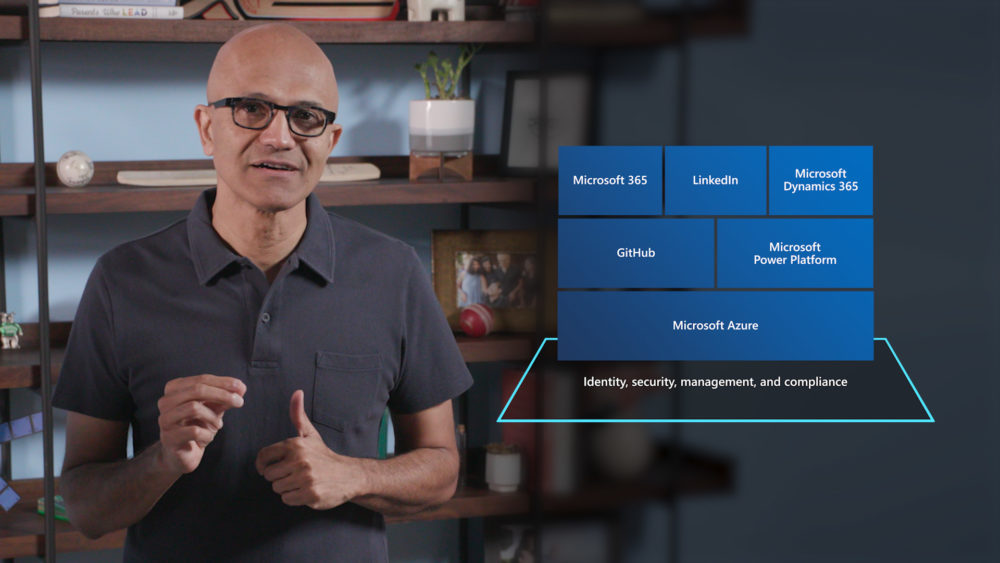 “We’re the only company that offers integrated, end-to-end capabilities across identity, security [and] management, as well as compliance,” Nadella noted. Microsoft was now analysing “8 trillion security signals per day” he added as it sifted through user activity to try and identify attempted security breaches.

Microsoft announced an expansion of its Defender security product set to deal with a wider range of IT environments and devices.

“The new Defender capabilities include coverage for Android and iOS, and multi-cloud protection for SQL Server.”

The term Infrastructure Modernisation rose from the expensive struggle businesses face maintaining, upgrading and scaling their digital content infrastructure requirements. This infrastructure refers to data center hardware, including all the storage servers, network devices, operating systems and middleware that allow companies to store, protect and access content. It’s usually complex, expensive to manage, a hassle to manage and update, hard to expand, and, in many cases, needs modernising.