Those five companies, which collectively were just over US$2 trillion in 2017, now each have trillion-dollar valuations and a collective market capitalisation of US$9.3 trillion.

The pandemic has been incredibly good to Big Tech companies, no matter how they generate their revenue. Apple, which makes hardware like the iPhone and MacBook Air as well as streaming services such as Apple TV+ and Apple Music, saw surging demand for its devices in the last quarter. Apple’s iPhone sales alone totalled nearly US$40 billion in the latest quarter, up 50% from a year ago, as iPhone owners upgraded to the new iPhone 12 range in the midst of the pandemic.

Microsoft’s profit for the quarter was $16.5 billion, up 47% year on year. It’s Azure cloud business posted 51% growth year on year. Drilling into its product categories reveals staggering growth too. The Dynamics 365 business was up 49%, Intelligent cloud, up 30%, Productivity and Business Processes was up 21%. Only the good old personal computing category, which was the heart of Microsoft decades ago, had mediocre growth at 9%.

Amazon had another $100 billion revenue quarter, with its cloud business Amazon Web Services, seeing its revenue grow 37% to US$14.8 billion with operating income of US$4.2 billion. The largest chunk of Amazon’s revenue comes from its gigantic e-commerce operation which consumers all over the world flocked to during the pandemic to get goods delivered to their doors. 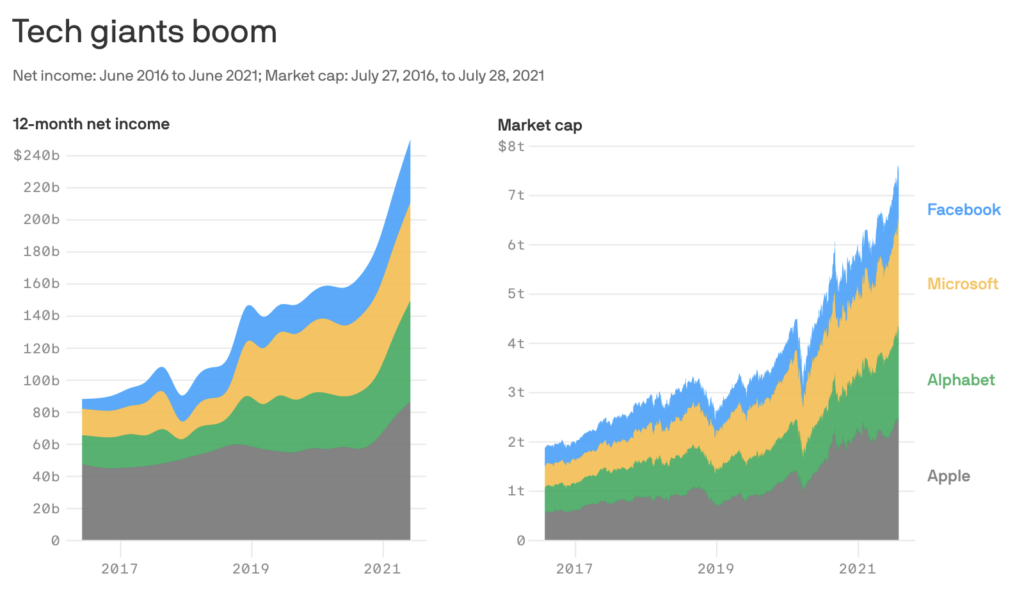 Google and Facebook, which rely on digital advertising, saw huge demand, despite warning the market a year ago that the pandemic would crimp appetite to advertise. Facebook’s ad revenue has grown 55% in the last year, while Google’s is up 68%.

These are the sorts of growth numbers start-ups are expected to experience, not massive mature businesses. Youtube alone recorded a record US$7 billion in ad revenue in the year to June 30 and Microsoft, which owns the business networking platform LinkedIn, said digital ads had pushed revenue from it to over US$10 billion. 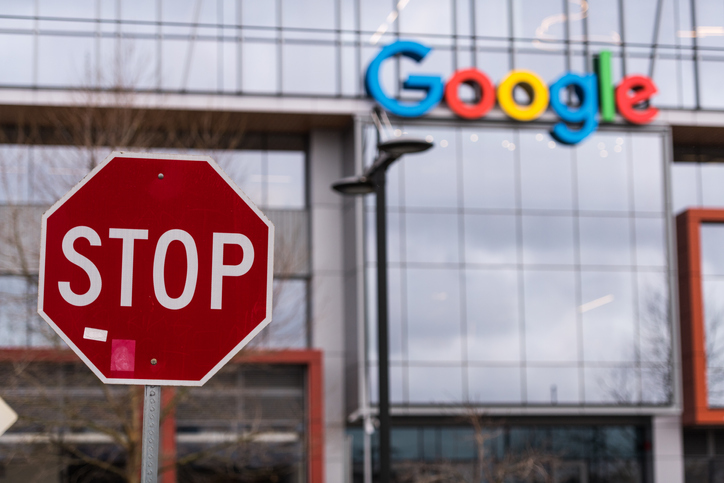 Seattle, USA – Feb 4, 2020: A stop sign across from the new Google building entrance in the south lake union late in the day.

All of the tech executives on earnings calls this week warned that the stellar run of revenue growth and profitability can’t continue. For Amazon in particular, opening back up for business as populations around the world are vaccinated may slow things down, as consumers emerge back into a retail world of greater options.

The epic growth of these mega-powerful companies has implications for all of us. As the New York Times put it this week:

“What’s clear more than ever is that America’s tech titans have formed a separate universe in which they are the sun, and everyone else — billions of humans, other companies, entire countries and governments — are mere planets that revolve around them.”

It means they have more money to invest in cementing the dominance of their businesses further. Witness Google this week opening an engineering operation in New Zealand as well as announcing a second A/NZ cloud region which will be based in Melbourne and supplement its existing data centre in Sydney. A new POP (point of presence) here will also allow Google Cloud customers to send their traffic over Google’s private network in its entirety which is a good security-boosting measure.

As we look on from afar at what are the most successful companies in the history of the planet, there are five things we can take away that could apply to whatever business venture you are working on yourself…

All of the companies continued innovating and releasing new products through the pandemic. Microsoft, in particular, went large on its communications and collaboration platform Teams, which has seen it made major inroads as companies shifted millions of people to remote working. These companies could have slowed product development cycles down and waited out the pandemic. But they identified the growing appetite and accelerated what they were doing. Their ability to meet demand under challenging circumstances is remarkable.

While 50% growth isn’t sustainable for years to come, the gains these companies made in the last year sees them reset to normality at a level of revenue, market share and customer engagement they couldn’t have dreamed about going into 2020.

All of these companies dominated certain business categories before the pandemic. The surge in digital uptake saw them effectively make monopoly rents as people flocked to their services. Rather than take a punt on new start-ups or smaller players, businesses and consumers embraced what they knew, the reliability of Microsoft, the familiarity of an iPhone, the endless choice of Youtube and Amazon and the tried and tested results of Facebook.

These businesses are still making huge mileage from the network effect – which dictates that as the number of people in the network increases, the greater the value there is in belonging to that network. While all of the five big Tech titans have numerous competitors, in at least one category they have a virtually unassailable lead, which allows them to build a ‘moat’ around the core of their business and generate the cash to see off further competition. At some point this behaviour becomes detrimental for everyone in the network and regulators will take action, as they are set to do here to break up the cosy duopoly in our grocery industry.

Small businesses, from restaurants to boutique accountancy firms, used the pandemic to reinvent their processes, often by necessity. Many retailers had to stand-up online ordering and click and collect services for the first time. Small businesses moved to software as a service (SaaS) offerings as staff were unable to get to the office. Two of the Big Tech  titans in particular have seized on this trend – Facebook and Amazon.

Facebook, after all is the go-to platform for small businesses to advertise. It has millions of advertisers that collectively are more important to it than giants like Coca Cola, Unilever and McDonalds. Facebook is in the process of turning its social network into an e-commerce engine so a company’s page can become a virtual store and a place where people can browse, order and pay for goods and services. Amazon likewise has enhanced the merchant aspects of Amazon.com during the pandemic to entrench its position as the place for merchants to gather. The collective value of small businesses and their spending power shouldn’t be ignored. New Zealand after all, is a nation of small businesses, as Rod Drury realised when he dreamt up Xero.

The Big Tech companies early in the pandemic that their biggest challenge would be keeping their workforce united and productive in the face of lockdowns and work from home orders. The proactive ones made life as easy as possible for employees, allowing flexible working hours, giving them the technology they needed to do their work comfortably at home and making greater use of online communication and collaboration tools.

Moving at speed to get new product features out the door, agile methodologies and their associated sprints became more important than ever and the minimum viable product (MVP) came into its own.

The tech sector is facing a digital skills crisis – everyone is poaching experienced staff from each other as they try to meet demand. Tech companies are having to pay more, offer greater perks and invest in the skills pipeline at its earliest stages to acquire and retain the talent they need to grow. Assuming there will be a long queue of people looking to

The beauty of a business like Microsoft’s Azure platform, Apple Music and Facebook is that the marginal cost of adding extra customers is very low. Azure is almost infinitely scalable, Amazon barely blinks at another 10,000 products being added to its Amazon.com store. If an extra five million locked-down and entertainment-starved users sign up to Apple TV+ that’s all the better for Apple.

Their services are so easy to use that in many cases, meeting additional demand doesn’t come at significant cost. Sure, Amazon has taken on more than 60,000 staff since March brining its employee headcount to over 1.3 million. But it has to warehouse and ship packages. The weightless economy is highly scalable on existing infrastructure and the pandemic has shown the beauty of that business model. 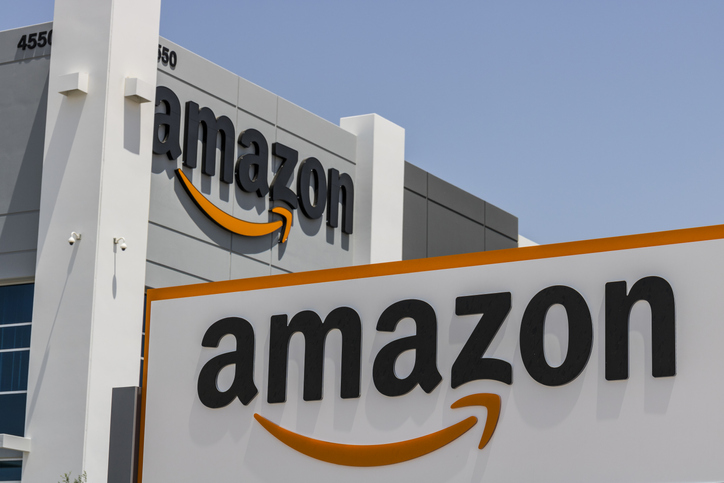 The music isn’t about the stop. The party isn’t over for Big Tech. But as the world recovers from the pandemic, the big five companies face some major challenges.

Supply chains are still under major stress. Apple flagged this week that the launch of its new iPhone 13 line-up will be hit by its inability to procure computer chips and other components in the quantities it needs. A general shortage of loic chips and processors will impact the business of any tech giant that relies on selling devices in large numbers or buying equipment to run high capacity computing.

Then there’s the looming spectre of antitrust activity and regulation. Various US government agencies and individual states have launched anti-trust investigations into Facebook, Google, Apple and Amazon, alleging anti-competitive behaviour and seeking to curb what they see as monopolistic behaviour.

This is a nightmare for people like Apple’s Tim Cook, who could see his App Store monopoly removed or Mark Zuckerberg, who may be forced to divest Instagram and WhatsApp. The legal action associated with these actions could play out over years and ultimately may end in failure. But they signal an end to the free reign tech companies have been given to innovate, disrupt and grow exponentially. They are deemed now to be simply too powerful.

Nevertheless, as we shake our heads in awe at the wealth they have created in the last year, we should in our own way, learn from what made these companies so powerful and apply their gold-plated tricks where we can.